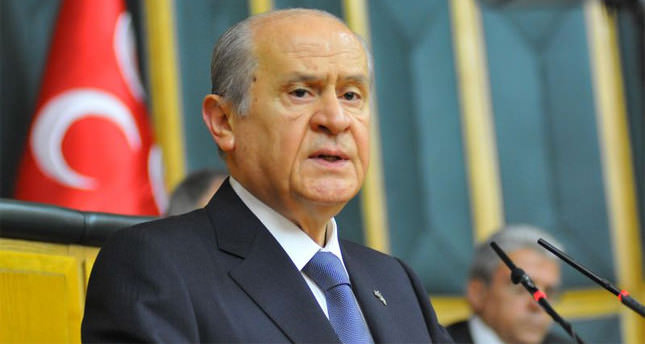 by Daily Sabah May 27, 2014 12:00 am
ISTANBUL — With less than three months are left before Turkey's first presidential election in which the president will be elected by a popular vote, opposition parties, including the Republican People's Party (CHP) and Nationalist Movement Party (MHP), have sped up their consultation meetings and efforts to nominate candidates to run for the post. A joint candidate agreed upon by all opposition parties is still among the options. Bahçeli is searching for a joint candidate who will be able to compete against the Justice and Development Party's (AK Party) candidate. MHP leader Devlet Bahçeli previously held talks with figures in Turkish politics on this issue. As the search for a candidate continues, Bahçeli is expected to meet with Kurdish and Alevi representatives this week to consider their suggestions.

Ahead of the talks, Bahçeli established guidelines for the talks with Kurdish representatives and stated that he would not hold talks with the PKK, a terrorist organization that took up arms against Turkey in 1984 to carve out a separate state in southeastern Turkey, or the PKK's leader Abdullah Öcalan who is sentenced to life imprisonment on İmralı Island. Bahçeli is expected to meet with the Alevi-based Cem Foundation and its head İzzettin Doğan. Bahçeli's scheduled talks are regarded as a huge step forward in terms of a first-contact between a nationalist party and Kurdish representatives.

Bahçeli, in his previous statements, claimed that the candidate will be welcomed by every social group in Turkey but stressed that they will be closer to the nationalist side. The party has since discontinued field work for the 2015 general elections and redirected its efforts to the presidential election campaign. The MHP wants to parlay the polarization in society which has become apparent after the Gezi Park protests in June 2013, according to analysts. Although the MHP had said that they would not ally with any other opposition parties, the party is now exploring the possibility of such an alliance.

The MHP administration has started organizing meetings and conducting surveys to determine which qualities the public is seeking in a candidate. Among the qualities most commonly referenced were being nationalist, conservative, able to represent the whole Turkish society and willing to cover the needs of liberals.

CHP leader Kemal Kılıçdaroğlu is also continuing his search for a presidential candidate by meeting with various figures and organizations. This week, Kılıçdaroğlu is expected to meet with business representatives and associations, including the Association of Independent Industrialists and Businessmen and the Turkish Confederation of Businessmen and Industrialists. As part of consultation talks, Kılıçdaroğlu spoke with provincial presidents and CHP deputies, the Confederation of Turkish Tradesmen and Craftsmen, Turkish Agriculture Chambers Union and the Turkish Bar Associations about possible presidential candidates.

Bahçeli and Kılıçdaroğlu are expected to meet to discuss a joint candidate option to see whether they can agree on an inclusive candidate before the nomination process begins. In the first week of May, Bahçeli said, "The candidate that we [MHP] will nominate will be a candidate that can run the country, rather than being the MHP's candidate." He added that if other parties nominate a candidate who is seen as more inclusive, MHP can also support that candidate just to stop polarization in the country.
Last Update: May 27, 2014 2:53 am
RELATED TOPICS