Turkish people living abroad happy to be eligible for vote 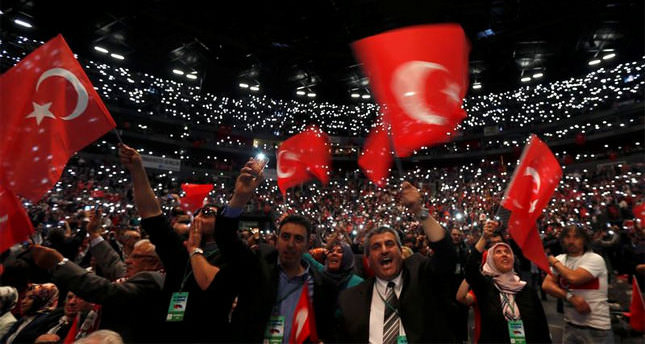 by Ali Ünal May 27, 2014 12:00 am
ROTTERDAM — Turkish citizens living across Europe will be following the campaign trails of many political parties now that they are eligible to vote. Officials fearing crowding at diplomatic missions abroad on election day are considering setting up more polling stations.

Last Saturday Prime Minister Recep Tayyip Erdoğan addressed thousands of Turkish citizens in Cologne, Germany. His address was interpreted as the beginning of a presidential election campaign abroad. Although the candidates for the upcoming election are not yet known, Prime Minister Erdoğan is expected to stand for the presidency. A 2012 change in Turkish law allows Turks living abroad to cast ballots for the first time in national elections. Thanks to the change, 2.7 million Turkish citizens have become eligible to vote at 2,392 polling stations in 54 countries. The highest numbers of Turkish voters abroad are located in Europe.

Turkish votes in Germany alone are the equivalent of Turkey's fifth largest city Adana and the total voting population abroad will equate to around 5.5 percent of the total electorate. It's a significant number that stands as a game changer.

Therefore in the coming days Prime Minister Erdoğan is expected to visit different cities in Germany, the Netherlands, France and Austria as part of the election campaign.

In previous elections, Turkish citizens were required to return to Turkey to vote and therefore only seven percent of Turkish citizens voted in the last elections. With the change in law, this percentage is expected to increase significantly. But high expectations on the voting patterns of those abroad can cause disappointments for candidates.

In the Netherlands, only 37 percent of the electorate turned out to vote for last week's European Parliamentary elections and questions still remain about the will to go to the ballot box outside of Turkish borders.

"Yes I have heard that we can vote now. I will cast my vote if anything more important comes up on the Election Day," said shop owner Hakkı Sevinc in Rotterdam, the second largest city in the Netherlands. Ahmet Ozturk, a docker who follows Turkish politics more closely said, "I will absolutely vote for Erdoğan in the upcoming election. Every time I go back to my country I see more developments and I believe Erdoğan will achieve more as president."

Hakan Oz, a retired worker, drew attention to another point. "If I vote I would vote for Erdoğan but I really don't want to wait in the long queue at the consulate to vote." In fact Turkish officials are currently discussing the possibility of using sporting facilities, schools and fairgrounds as polling stations due to a fear that Turkey's diplomatic buildings in these countries will not be able to accommodate the crowds. It seems like more people will cast their votes if Turkish officials are able find an effective solution for the long queues. There are other people who don't know much about the election and housewife Fatma Yılmaz is one of them.

"I've heard that we are now eligible to vote but I don't know the details. If they distribute fliers to inform us more people may be interested in voting," Yılmaz says. Software Engineer Mustafa Kaya gave a vital example regarding how the Turkish see the elections. "I don't think our people don't care much about the election," said Kaya. "In the last local election the far-right Livable Rotterdam (Leefbaar Rotterdam) Party received great support in Charlois, which is mostly inhabited by Turks and foreigners, because Turks did not bother to go for vote."

Prime Minister Erdoğan has strong support among Turkish immigrants in Europe. Whereas in the Netherlands, Turks don't seem overly enthusiastic about the election compared to Turks in Germany. Those who do intend to vote however tend to side with Erdoğan.
Last Update: May 27, 2014 3:20 am
RELATED TOPICS