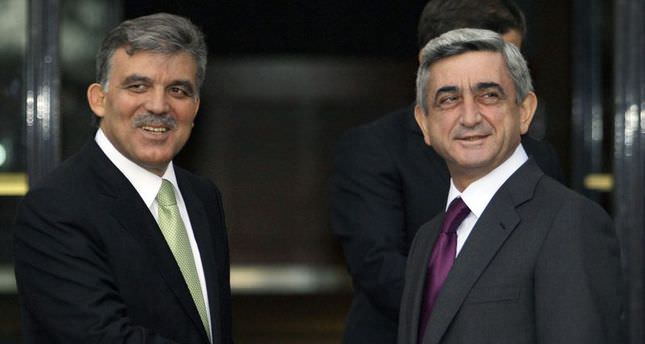 by Daily Sabah May 28, 2014 12:00 am
ISTANBUL — Armenian President Serzh Sargsyan recently created a stir when he invited the next president of Turkey, who will be elected in the upcoming August presidential elections, to the 100th Commemorative Ceremony of the alleged Armenian Genocide planned to take place in Armenia next year.

Expressing at the commemoration committee meeting that Turkey has taken unprecedented steps toward reconciliation with Armenia, Sargsyan also stated that Turkey has continued its "100-year-old policy of denial."

"I officially invite the president of Turkey to Armenia to face the compelling evidence of the Armenian Genocide on April 25, 2015," said the president, who received a wide range of criticism from Turkish media outlets which called his invitation arrogant and impertinent.

Prime Minister Recep Tayyip Erdoğan at a speech last month expressed his condolences to the grandchildren of Armenians who were killed at the beginning of the 20th century. The Armenian diaspora, along with Armenia, have called on Turkey to recognize the death of 1.5 million people due to the forced emigration policy of Armenians who lived in Turkey during the later years of the Ottoman Empire as "genocide," while Turkey claims 300,00 to 500,000 Armenians were killed along with Turkish people.