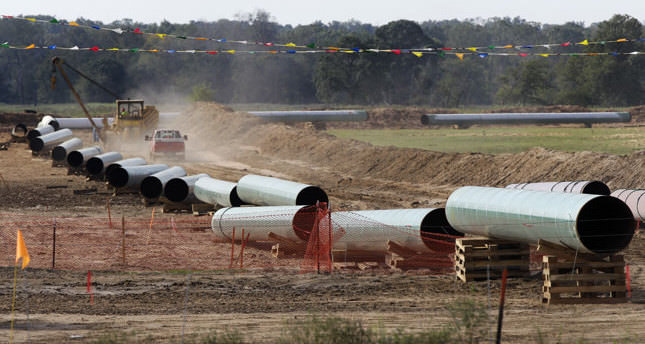 by Ali Ünal May 28, 2014 12:00 am
ROTTERDAM — Israeli-Turkish relations have been in crisis since the attack on the Mavi Marmara flotilla in 2010 and for months both countries have been taking part in negotiations to mend ties. But a Turkish court's decision to issue an international arrest warrant for four former Israeli military commanders involved the flotilla attack may delay these efforts. However, despite the political turmoil, the probability of an Israel-Turkey pipeline project has been given a boost following an announcement in recent days by Australian energy giant Woodside.

Last week Australian hydrocarbon firm Woodside Energy officially announced it had withdrawn from a $2.75 billion (TL 5.76 billion) deal to acquire a 25 percent share of the Leviathan natural gas field. The Australian company first started negotiating to participate in the joint venture with Noble Energy Mediterranean, Delek Drilling, Avner Oil Exploration and Ratio Oil Exploration in late 2012. Woodside has offshore development expertise and championed the idea of floating liquefied natural gas (FLNG) export from the Leviathan basin. The main reason for Woodside's decision was that gas prices in China and the Far East are currently 50 percent higher than the price would be for gas obtained via a pipeline to Turkey. Also, constructing an FLNG facility would have cost at least $10 billion and as much gas as possible needs to be exported to justify such costs.

Considering an undersea gas pipeline to Turkey is a relatively cheaper project compared to constructing an FLNG facility, Leviathan partners Noble Energy and Delek are reportedly in talks over constructing a pipeline running from the giant Israeli field to the Turkish coast. Moreover, Turkish energy companies Turcas Petrol and Zorlu Holding have recently announced that they are considering building a pipeline which may cost $2-$2.5 billion and could supply 7-10 billion cubic meters of gas annually to Turkey via a 500-kilometer undersea route. Therefore, the undersea pipeline from Israel's Leviathan to southern Turkey would be a less costly option.

Additionally Cyprus is another prospective partner in the undersea pipeline project. An Israel-Turkey pipeline would have to traverse Greek Cypriot and Turkish Cypriot's Exclusive Economic Zone and therefore Israel and Turkey may have to secure Cyprus' assent by adding their gas to the pipeline.

Drilling in the Leviathan reservoir is expected to begin sometime in 2017 and the Turkish market alone could absorb the quantities of gas that Israel and Cyprus can supply. Moreover, using Turkey as a gateway to Europe would be the best option to sell this gas to world markets.

After the withdrawal of the Woodside company, an Israel-
Turkish undersea pipeline project would most likely become the best option for the Leviathan consortium. But under these political conditions this project does not seem possible to implement. Therefore the restoration of Turkey-
Israel relations and solving the Cyprus problem could happen in the near future and hydrocarbon riches in the eastern Mediterranean basin could play an important role in altering the historical equation.
RELATED TOPICS