Turkey contacts Interpol after court rules for arrest of Israelis 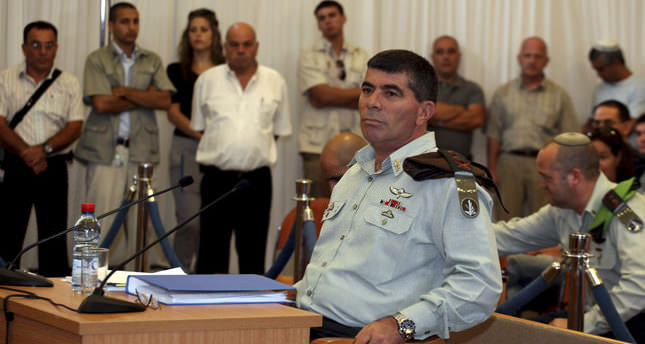 by Sena Alkan May 28, 2014 12:00 am
ISTANBUL — Efforts by local nongovernmental organizations and the families of the victims of the 2010 Mavi Marmara attack to seek justice at Turkish courts took a dramatic turn this week as an arrest warrant was issued against four senior Israeli officials, including the former Israeli Chief of General Staff Gabi Ashkenazi, implicated in the raid. As with similar cases in the U.K., Turkish politicians preferred not to comment on an ongoing criminal trial. However, the court decision does not seem to have put a dent on plans to build a pipeline between the two countries to bring gas from Israel's Leviathan field.

Istanbul's 7th High Criminal Court yesterday ordered the arrest of four Israeli commanders involved in the attack on the Mavi Marmara, a ship that was part of an international flotilla carrying aid to Gaza in 2010 and on which nine Turkish activists were killed. Turkish Prime Minister Recep Tayyip Erdoğan yesterday mentioned the ruling and stated that he is waiting for a full legal decision before commenting at length on the subject and that compensation for the raid in international waters, which could see as much as $20 million paid in compensation to the families of Mavi Marmara victims, is a separate matter.

The recent Turkish court ruling was based on a precedent set when a court in the U.K. issued arrest warrants for certain Israeli officials. Former Israeli Navy Commander Eli Marom, who was in charge during the Operation Cast Lead, was taken into custody at Heathrow Airport in 2013 as part of complaints filed by Palestine-based organizations in England. An arrest warrant was issued previously against former Israeli Foreign Minister Tzipi Livni in England in 2009 following a bombing campaign targeting the Gaza Strip and it was alleged that Livni cancelled her U.K. visit after the arrest warrant was issued.

Prosecutors are seeking life sentences for the arrest of former Israeli Chief of General Staff Gavriel Ashkenazi, Israeli Military Intelligence Chief Amos Yadlin, Air Force Intelligence Chief Yavishai Levi and Navy Commander Eliezer Alfred Maron on charges of inciting murder through cruelty or torture and inciting injury with firearms. The court order says that should those generals cross into Turkey, they will be arrested. According to the court rule, an arrest warrant is necessary because the generals, who are being tried, did not attend the trials and did not respond to an invitation from a department affiliated with the Turkish Justice Ministry.

An Interpol red notice was also issued for the officials. The Israeli daily Ma'ariv reported that Israel appealed to Interpol and alleged that the decision to issue the court order was politically-motivated.

The complaint was first issued to the Turkish court in 2012 and the first hearing was held in November 2012. In the case, 490 individuals, including victims' families and activists from 37 countries, appeared as plaintiffs and victims, and those former generals were tried in absentia. According to the Turkish Penal Code, the generals were tried on charges of intentional homicide, attempted murder, deliberately injuring, plundering, piracy, damage to property and deprivation of liberty.

Bülent Yıldırım, the head of Humanitarian Relief Foundation (IHH) which organized the aid flotilla, on Monday denounced Israel over the attack. During testimony, Yıldırım stated that the U.N. and European Parliament supported the Mavi Marmara aid vessel and activists declared to Israel that they did not have any weapons. Yıldırım said that activists on the Mavi Marmara did not expect any military attack against the aid vessel.

Daily Sabah spoke to legal expert and AK Party Istanbul Deputy Bülent Turan regarding the court decision and what he expects will happen now that the ruling has been issued.

Some claim that nothing will come out of the complaints against former Israeli commanders, but the ruling shows that the Turkish Republic can hold accountable those who carry out unlawful acts against Turkish citizens, Turan said.

"The ruling means that those four Israeli commanders will be arrested as soon as they enter Turkey or any country that is in agreement with Turkey to extradite criminals. If Interpol gives an affirmative reply to Turkey regarding the red notice, those commanders will be sought with a red notice almost worldwide."

He said that negotiation between countries and compensation liability are completely different matters.

"The Mavi Marmara case has been continuing in accord with criminal procedure and no intervention is possible. No matter what happens, perpetrators of the attack will be held accountable," added Turan.

Reiterating that Israel was wrong for carrying out the attack according to the U.N. report, Yıldırım said Israeli commanders opened fire even though the activists had surrendered.

In a press conference after the trial, Yıldırım alleged that Israel offered IHH the opportunity to open an office in Israel and send aid to Gaza Strip, but IHH refused those offers. Yıldırım said, "the best relation with Israel is having no relation at all."

Yıldırım said that no matter what happens IHH will not withdraw the case. He added, "Certain bureaucrats and media outlets in Israel alleged that the Turkish government has assured that the case will be withdrawn. If a bureaucrat ensures a withdrawal, it is pure treachery."

Activists on the Mavi Marmara vessel were killed when Israeli commandos stormed the ship in international waters.
Uğur Süleyman Söylemez, a 10th activist injured in the raid, died last week after he spent four years in coma.

Israel initially justified the attack but in 2012, it offered an apology and offered a compensation of $20 million to the families of Turkish activists who died aboard the vessel.

The attack badly damaged Turkish-Israeli relations and both countries virtually cut off their long-standing ties. Relations are not expected to see a thaw in the near future as Turkey has also demanded that Israel lift its blockade on the Gaza Strip, a condition Israel sternly rejects.

The fourth anniversary of the attacks will be commemorated by the IHH that organized the aid flotilla with a march in Istanbul that will conclude in Sarayburnu, where the Mavi Marmara vessel departed for Gaza.
RELATED TOPICS