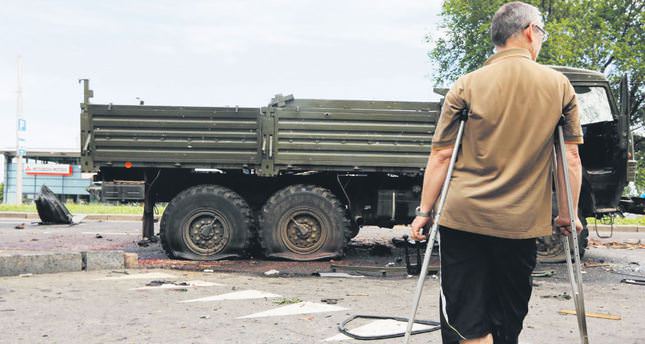 Turkish officials state that Turkey has never recognized the de jure division in Ukraine and sides with the U.S. and the EU but does not want to harm relations with Russia due to commercial dependency

President Abdullah Gül has reaffirmed that Turkey supports Ukraine's territorial integrity and is ready to help find a solution for the ongoing crisis in Eastern Europe. It was learned that the president called his newly elected Ukrainian counterpart, Petro Poroshenko, and assured him that Turkey will make every effort to resolve the crisis on the basis of international law.

Billionaire businessman Poroshenko won the presidential elections in Ukraine with 55.9 percent of the votes after the former pro-Russia president, Viktor Fedorovych Yanukovych, left the country due to the increasing protests against him and his government. Turkey, as a NATO member since 1952, has served in several troubled regions in the world, including Somalia and Afghanistan.

According to Turkey's permanent Ambassador to NATO, Haydar Berk, NATO is the most important dimension of Turkey's foreign policy. Thus, it can be considered natural for Turkey to side with the pro-NATO Ukrainian government against the pro-Russia separatists. Crimea, which has been occupied by Russian forces and territorially joined Russia after a controversial referendum, is of huge significance to Turkey due to historical and cultural reasons. According to Crimean foundations in Turkey, as many as 10 million Crimean Turks who were expelled from their motherland during Joseph Stalin's era and before live in Turkey.

Following the unification of Crimea with Russia, many Crimean Tatar people have been feeling insecure due to the possible return of Stalinist repression despite official promises to respect their rights and freedoms. It was Joseph Stalin who accused the Tatars of sympathizing with Nazi Germany and ordered a mass deportation from the Crimean peninsula, all Crimean-inhabited localities as a collective punishment. It is estimated that many of the 200,000 deportees died on their way into exile in Central Asia and eastern Russia. Until the 1990s, many Crimean Tatar people were not allowed to return to their homeland under Soviet rule.

Now that they started to live under the Russian control, there has been an increasing distrust of the new government authorities because of the sad history of their relations with the Russian government. Considering the historical background, the likelihood of the idea of the Moscow government mistreating the Crimean Tatars has led many people to flee the peninsula out of fear of political persecution. Ukrainian Ambassador Sergiy Korsunsky in Ankara told Anadolu Agency: "Many families are split now. Men stayed in Crimea and sent their mothers, wives and children to Ukraine because they have to guard their homes and properties."

Based on Turkish politicians' statements, Turkey prefers following a moderate policy on the Ukrainian crisis, while officially declaring its support for Ukraine's territorial integrity. Foreign Minister Ahmet Davutoğlu has repeatedly stated that Ukraine must not be divided into East and West or pro-Russia and pro-West.

While Turkey has strong relations with the EU and the U.S., which support Ukraine's new government and oppose Russia's intervention unconditionally, the trade budget between Russia and Turkey stands to triple to $100 billion (TL210 billion) by 2023. Moreover, Turkey's energy dependency on Russia cannot be ignored. Turkey, which seeks alternative energy sources like the pipeline between Israel and North Cyprus, currently imports 27 billion cubic meters of natural gas from Russia. It has also been observed that the EU has not approached the crisis in the same manner as Germany, seeking to expand its trade budget with Russia, while Poland and other Eastern Europe countries are worried about Russia's expansion and the thought of history repeating itself.

Pointing out the internal division among the Western countries, Mehmet Akif Okur, who is an associate professor at Ankarabased Gazi University, told Daily Sabah, "EU countries are divided on the method of approaching the crisis. "It can be said that the EU does not have a common strategy to apply. Moreover, the U.S. administration opposes Russia strictly but cannot determine how strict to be. So, while the primary addressees of the crisis are not unified to raise a common voice against the crisis that may turn into a dangerous civil war, Turkey has to act while considering every scenario. "What Turkey should do is to explain to both Russia and the West why a unified Ukraine is significant and why it pays that much attention to Crimea."

Okur, admitting that Turkey's policy does not pave the way for a solution in the shortterm, added, "Turkey and the EU have a problem trusting each other due to Turkey's and the EU's domestic policies evidenced by the tension between Prime Minister Recep Tayyip Erdoğan and the German media on his recent trip to Cologne." As a result of problems with the EU and the dependency on Russia, Okur says Turkey softens its policy, and there are a number of scenarios on the table that may harm Turkey further down the line. Thus, Turkey has to tread carefully when addressing the Ukrainian issue.

An expert on Eurasia, Eşref Yalınkılıçlı, told the Daily Sabah, "In the last decade the trade budget, thus the dependency on Russia, has increased." "Erdoğan made personal efforts to tighten relations with Russia. Yet, the more Turkey economically and politically expands, its neighbors, including Russia, will be disappointed.

The current policy towards Russia is not sustainable as relations will be harmed in the end, as the two countries disagree on not only Ukraine but also Syria and the Azerbaijan-Armenia dispute."

Yalınkılıçlı, as well as Okur, said that Turkey has to support Crimea unconditionally and oppose recognizing Crimea as Russian territory. "Turkey must side with the EU on the Ukrainian crisis and must not forget that there is a historical dispute with Russia on several issues," said Yalınkılıçlı. "We also must keep in mind that if Russia fails to mobilize or protect Orthodox Christians in the region, Turkey remains as the only alternative."

Seemingly, Turkey has to play its cards close to its chest, as Russia is one of its commercial partners, while the EU and NATO are indispensable on foreign policy. According to the experts, the most significant issue for Turkey is Crimea's situation due to historical ties and direct kinship.
RELATED TOPICS