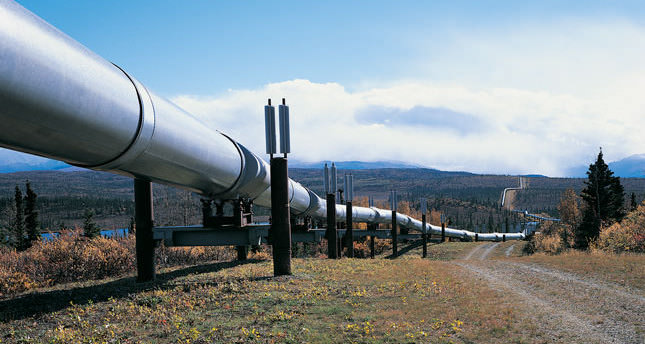 by Ali Ünal May 31, 2014 12:00 am
ANKARA — The Iraqi government's threat to file a lawsuit against Turkey for facilitating the sale of oil from the KRG is meaningless because there is no legal basis for such an application at the International Chamber of Commerce, according to Turkish officials.

The announcement of the oil sale came after months of negotiations between Baghdad and Irbil to solve the ongoing disputes over sharing oil revenues deadlocked. Moreover just after the announcement Iraq's central government stated that they filed legal action against Turkey and the pipeline operator at the International Chamber of Commerce (ICC) in Paris.

However, one week after Bagdad's threat of legal action, Turkish Energy Minister Taner Yıldız confirmed that Kurdish oil flow continues in defiance of Baghdad's legal move and he stated that they have not received any notices regarding the application. "We have not received any notices on our side. If that were the case we would be able to see them," he said, adding the Economy Ministry is following developments to see if there have been any embargo attempts against Turkish companies, as Iraq has threatened to do.

Ankara remains calm, keeping an overall positive attitude over the ongoing dispute. Besides, Turkish officials remarked that the sale was made according to the provisions of the Iraqi constitution and they have carried on their relationship with Irbil and Baghdad in transparency. "We have been informed by both Irbil and Baghdad about details of every step even if they had not asked," a senior official from the Turkish Ministry of Energy remarked. On the other hand KRG officials share similar sentiments. Kurdish media outlet Bas News reported that Falah Mustafa, head of the Kurdistan Region's Department of Foreign Affairs (DFR), said that selling Kurdish oil is constitutional and that the Iraqi central government was aware of the process from the start.

Furthermore Turkish officials claim that Baghdad has no legal basis for the law suit at ICC. "Baghdad should face the commercial loss in order to file legal action at ICC. But both Baghdad and Irbil receive their shares defined by the Iraqi constitution," a senior official from the Turkish Ministry of Energy remarked. Yet legal experts say that legal action is not the first option for the most cases at ICC. "The law suits at ICC sometimes may take years therefore amicable settlement is very common," said an international legal expert. Whereas Turkish officials also stated that they have not received any request from Baghdad claiming amicable settlement so far. Therefore all these developments bring to mind the question whether Baghdad's threat was just a bluff.

According to the Iraqi constitution, Kurds control only a 17 percent share of oil revenues, although Kurdish authorities frequently complain that they receive less than their rightful share.

However, according to some independent studies, the KRG's portion has been receiving 10.5 percent instead of the 17 percent stipulated in the constitution. This has in turn affected the KRG's economy negatively and in recent months the Irbil administration has had difficulties paying civil servants' salaries.