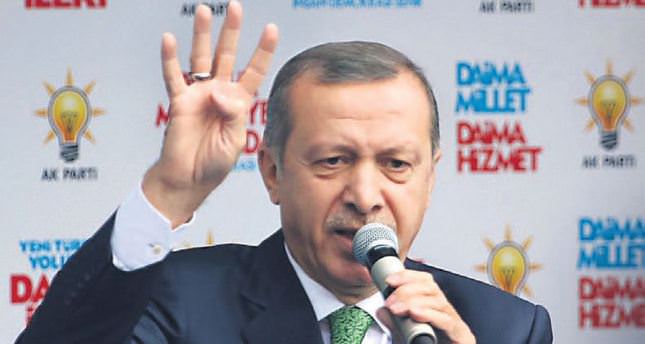 by Daily Sabah May 31, 2014 12:00 am
ISTANBUL — The government is planning to lower the minimum age for becoming a parliamentarian to 18 in order to encourage the active participation of the younger generation in politics, said Prime Minister Erdoğan on Friday.

Turkish Prime Minister Recep Tayyip Erdoğan said the government is planning to lower the minimum age for taking a seat in the Turkish parliament to 18. Addressing young people in "Our Ancient Civilization and Great Turkey" conference held in commemoration of Istanbul's Conquest (May 29, 1453), Erdoğan on Thursday called on young people to be active in politics.

The prime minister pointed out that the minimum age for candidacy in most European countries, such as Germany and Holland is 18 while certain countries keep the age restriction at around 21.

Criticizing the far-right Nationalist Movement Party's (MHP) reaction against reducing the age of candidacy, Erdoğan said, "When we [AK Party] dropped the age of candidacy to 25 [from 30], one of the MHP representatives in the Parliament stated that the Parliament should not be left to children [25-year-olds]. Those who can take the responsibility to represent the nation will take seats in the Parliament. The young generation, youth can say that they want to participate in politics as soon as they graduate from university."

The prime minister advised young people to be active in politics, to avoid conflicts, not to look down on those who are different, and to refrain from disregarding the value of morals and politeness.

Erdoğan sought to define how to conduct the young generation: Not necessarily by violence, conflict, slavery to "false" sheiks and preachers, ignorant to intangible values, but rather through regarding poets and writers such as Yunus Emre, Mevlana, Sheikh Edebali, Mehmet Akif Ersoy, Ahmed Yesevi with reverence.

He added, "My young brothers and sisters, the Republic inherited a milestone from the Seljuks and Ottomans and you will deliver to future generations this cause. You have a responsible toward your history and civilization. You will read, be able to speak at least one foreign language, and will disregard the illegal organizations which try to beguile their members under the guise of religion in order to achieve their political aims. You will not go after movements intolerant of different lifestyles. Our civilization, martyrs and ancestors will be your guide."
RELATED TOPICS