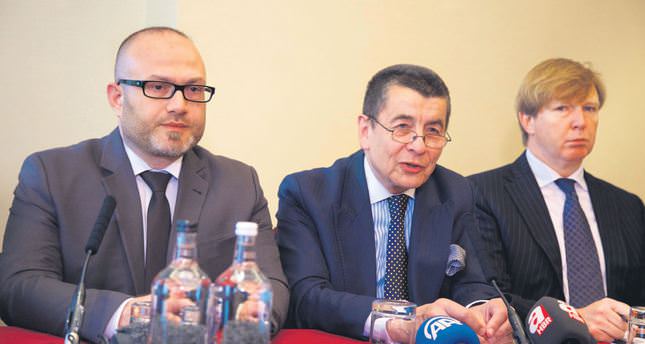 On the fourth anniversary of the 2010 attack, families of Mavi Marmara victims are taking steps to call Israel to account at the International Criminal Court

ISTANBUL — Although it had declared its withdrawal from the Palestinian territory in 2005, Israel has remained in effective control of the Gaza Strip, and tightened its control over the coastal enclave after the Hamas government came to power following elections in 2007. Gaza was blockaded from the air, land and sea and the free movement of people and goods was restricted. More than 1.5 million people have been left in deprivation and exposed to numerous military attacks so that the U.N. reported this situation as "intolerable."

In order to provide aid to deprived people and attract international authorities' attention to the illegal siege over the territory, humanitarian aid groups have sent supply ships and activists to Gaza.

In May 2010, the pro-Palestinian Free Gaza Movement organized a six-ship flotilla to deliver humanitarian aid to Gaza and break Israel's illegal blockade of the territory, in cooperation with the Turkish aid organization IHH Humanitarian Relief Foundation (IHH).

On May 31, Israeli forces intercepted the aid flotilla in international waters. Loaded with 60 tons of aid materials and 750 civilian activists from 37 countries, MV Mavi Marmara, the flagship of the humanitarian aid flotilla, was surrounded by zodiac boats and helicopters and targeted with live ammunition by fully equipped IDF soldiers.

When the vessel was raided by IDF troops, nine Turks and one Turkish-American were killed and more than 50 passengers injured. Turkish-Israeli relations, which had been deteriorating for some time, reached their lowest point following the attack. The attack on the aid vessel was immediately condemned by international authorities and members of civil society. In the aftermath of the incident, Turkish leaders, including Prime Minister Recep Tayyip Erdoğan and Foreign Minister Ahmet Davutoğlu, vowed to bring the perpetrators to justice, besides the IHH.

Since 2010, IHH's legal team have taken steps to appeal to Turkish and international courts on behalf of families of the victims and other civilians on board.

Daily Sabah conducted an interview with the British barrister Sir Geoffrey Nice who was recently named a legal representative of Mavi Marmara victims.

DS: How did you decide to take part in the Mavi Marmara lawsuit?

GN: English barristers do not usually go out seeking work but wait to be approached by possible clients who know of the barrister's interests and expertise. That happened in this case when I was approached by Elmadağ law firm and KC law from London and invited to represent the Union of Coromos and the passengers on the MV Mavi Marmara. This was a case squarely in my field of experience and I was honored to be approached and delighted to accept the invitation. The Mavi Marmara incident is one that gives rise to very important issues of law in addition to necessary consideration of the very significant human suffering that has been caused and that requires proper analysis in court. The ICC case, if one comes about, would involve trials of individuals for crimes, convictions for which would lead to criminal sanctions. Other cases in other courts - in Turkey or elsewhere - could lead to compensation being awarded to individual victims or to estates and the bereaved of those who were killed. It was a poignant moment this morning to learn of the death of Uğur Süleyman Söylemez.

This brings to 10 the number of those who lost their lives on a humanitarian mission that those acting for the victims and for Comoros will argue was attacked without justification and without lawful excuse, leading to killings that were criminal.

What would you like to say regarding the importance of the case?

GN: I should not say much about this pending ICC case to avoid prejudicing any court that will ultimately determine the relevant facts and law. However this much is well known in the international legal community: Israel has very strong support in international bodies including the U.N. It has for some time been thought that the International Criminal Court might be reluctant to engage with Israel because of political pressures that might operate on the court. The present prosecutor, Fatou Bensouda, may be free of the concerns that were expressed about her predecessor and there is every reason to believe that she can be - and should be - approached on the basis that she will do her task without regard to political or other pressures. The team representing Comoros and the victims saw Ms. Bensouda 10 days ago and offered assistance on any legal or factual matters of concern to her or her office. We await her conclusion on whether to start an investigation and have expressed to her the very strong arguments made by the victims that an investigation should be started. Accordingly, this case is very important as it gives the ICC every opportunity to be seen as an independent court, fearless of whom it investigates. We look forward to it establishing such a reputation in this and other cases.

DS: What are you expectations and requests of the International Criminal Court?

GN: That the court will do its task dispassionately and in conformity with the law on the basis of the material submitted with the original referral by Comoros and the material presented to the prosecutor last week following the meeting with her some nine days before that.

DS: If the court reaches a decision against Israel, do you think the case will set a precedent for other lawsuits concerning the crimes of the state of Israel against the people of Palestine?

GN: It may be hard for those caught up in the conflict to accept, but I am sure it is better for all parties to look at the case and the way it is dealt with at the ICC and at any other court without regard to the conflict, save to the extent it is relevant evidentially to the case or cases concerned. The law in any properly constituted court should operate free of regard to politics or to any historic political pressure.
Lawyers, and the courts they populate, are servants of the people and they serve the people best when they provide dispassionate advice to their clients and dispassionate arguments of integrity to the court. Courts themselves serve the public best when they, too, deliver judgments with integrity and without regard to political or other considerations. So the outcome of this case should not be seen as a precedent for what other acts may follow. As I said earlier it will be best if this case is considered to the maximum extent possible free of the Israeli-Palestine background. However, whenever a legal system is judged to perform well it is likely to attract more cases being presented by those who have found they can trust it. Whether the decision by the ICC in this case will affect the trust reposed in it and in other international courts is far too early to say.

DS: There is an ongoing negotiation regarding the amount of compensation that Israel will pay to the families of Mavi Marmara victims.
Do you think the issue of compensation will affect the course of the case?

GN: There is a difference between the criminal case before the ICC - assuming that the prosecutor investigates and decides to charge any individuals with crimes - and civil cases for financial damages that may be pursued by victims in Turkish courts or elsewhere. Although the ICC has power both to allow victims of crimes charged against individuals to participate in the proceedings and to recover some damages at the end the proceedings, there is no suggestion that any offer of compensation by the state of an individual charged at the ICC should affect in any way whether charges against that person should continue.

Indeed for a state to be able to "buy off " the prosecution of one of its citizens would run counter to the very principle on which the ICC was established, namely to exercise its jurisdiction over persons for the most serious crimes on international concern. Whether compensation offered by Israel to Turkey would lead to withdrawal of the civil actions for damages by individual victims or representatives of the estates of those whose were killed should be a matter for them. I understand that there will not be consent to any such withdrawal and in any event Turkey's negotiations may be of no consequence at all for non-Turkish victims.

There has been some reference to this case being taken to the world's top court, the International Court of Justice that deals with state against state issues. Any such court process would not be affected at all by the payment of compensation. However, it is far too early to think about that court when the process at the ICC and the recovery of compensation for victims requires present focus of attention.

Who is Sir Geoffre y Nice ?
Sir Geoffrey Nice QC has practiced as a barrister since 1971. He worked at the International Criminal Tribunal for the Former Yugoslavia - the ICTY - between 1998 and 2006 and led the prosecution of Slobodan Miloševi?, former President of Serbia.

Much of his work since has been connected to cases before the permanent International Criminal Court in cases involving Sudan, Kenya and Libya or probono for victims groups in cases concerning Iran, Burma, North Korea, which cannot be heard in an international court. He works for several related NGO's, lectures and comments in the media about various countries on international war crimes issues.
RELATED TOPICS