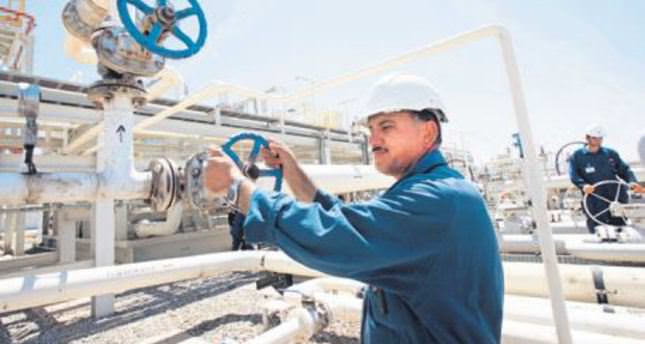 by Daily Sabah Jun 02, 2014 12:00 am
ISTANBUL — Kurdish Regional Government (KRG) President Massoud Barzani has threatened the central Iraqi government with the possibility of organizing a referendum in the autonomous region to declare independence, unless Baghdad accepts the KRG's demands. Barzani said,

In an official statement, the KRG administration also stated that the KRG would launch negotiations with the central Iraqi government in order to have a word in the central government, as it is described as a constitutional right.

Falah Mustafa, the head of the Kurdish region's department of foreign relations, stated: "French officials stressed that they would continue to support and assist the Kurdistan region and also showed their willingness to support us in the next stage. In the meetings, it was stressed that the Kurdish region has done its best, but that it cannot continue this way, and in the future we will have practical solutions."

The tension between the central and regional government has heightened recently for several reasons, including financial and political issues. The Baghdad administration has frozen the monthly budget allocated to the KRG. Secondly, the Baghdad administration opposes the sale of oil by the KRG to the U.S. and Israel via Turkey. Iraq's central government claims that the sale violates the federal constitution.

Baghdad says oil sales should be overseen by the central government. Declaring the export of KRG oil via pipeline to the Turkish port of Ceyhan "illegal," it is threatening to sue any company moving Kurdish oil from Ceyhan.

According to the Iraqi constitution, Kurds control only a 17 percent share of oil revenues, although Kurdish authorities frequently complain that they receive less than their rightful share. However, according to some independent studies, the KRG's portion has been 10.5 percent instead of the 17 percent stipulated in the constitution. This has in turn affected the KRG's economy negatively, and in recent months, the Irbil administration has had difficulties paying civil servants' salaries.

The KRG exported 100,000 barrels of oil per day (bpd) to Turkey, but now this rate has been increased to almost 120,000. The KRG's total production capacity is currently slightly more than 400,000 bpd, and it plans to increase this amount to 1 million bpd in 2015 and 2 million bpd in 2019. "Mr. Barzani told the French president that the Kurdistan region has done everything for the success of the democratic and political process in Iraq, but unfortunately, non-compliance with the constitution and not observing the national partnership have hampered the development of the process," said Mustafa. Yet, the central Iraqi government has not responded to Barzani's threats.

According to sources, the Barzani administration wants to leave Iraq and has a positive outlook toward establishing a federation or at least a totally visa-free zone with Turkey.

"The Kurdish people will decide on their future and how to establish relations with Baghdad by voting in a referendum."

Barzani, visiting French President Francois Hollande in Paris on Friday and Italian Foreign Minister Federica Mogherini in Rome on Saturday, noted that France and Italy pledged their support for the KRG. It was the first time the KRG flag was flown during visits.
Last Update: Jun 02, 2014 1:18 am
RELATED TOPICS