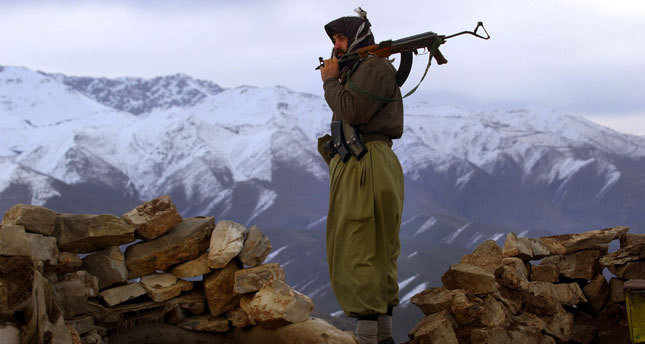 by Daily Sabah Jun 02, 2014 12:00 am
ISTANBUL — The face of Kurdish politics in Turkey is transforming. Parties are disarming and more are joining the political arena through a process of diversification. The PKK, based in its Marxist-Leninist ideologies, and its extension the Peace and Democracy Party (BDP), are no longer the only Kurdish political parties people can vote for with the creation of new parties such as HÜDA PAR (The Free Cause Party), a party which is representative of conservative Kurds who have been ignored for years. The PKK has held Ercan Alparslan, HÜDA PAR's District President of Dicle, which has drawn stark criticism from top officials in the party.

Şeyhmus Tanrıkulu, one of HÜDA PAR's founders visited Ercan Alparslan's family and expressed a clear opposition to such unlawful action by saying that the PKK and the BDP will only lose support through this conduct and that Kurdish people will not forgive the PKK and BDP, while adding they will provide the necessary support for Alparslan's family. In a joint press statement, HÜDA PAR officials emphasized that Kurdish people have an inherently Islamic structure and would not let the PKK, BDP. "As HÜDA PAR, we would like to announce to the public that we will continue to uncover the dark side of the PKK's ugly truth and continue our struggle to fight against them" read the statement, claiming that the PKK and BDP have unlawfully self-declared their autonomy over Kurdish-majority southeastern Turkey, while also denying the right to live to anyone who does not share their ideology. It also noted that abductions, along with the homicide committed in Dargeçit, Mardin has proven this fact. Referring to the hundreds of attacks targeting their party headquarters, members and officials with sticks, stones and Molotov cocktails, the press statement called the PKK to release Ercan Alparslan and explicitly stated that in the event he is not released or if he is physically harmed, HÜDA PAR would take immediate action.

Mehmet Bahattin Temel, the party's deputy president in a recent meeting said that the PKK is attempting to silence HÜDA PAR and any other parties, or organizations which are opposed to their own ideologies, in an authoritarian manner. "The PKK is attacking civilians in the region again" said Temel, who noted that conservative Kurds now have the media power to fight against such persecution, declare that the PKK is against the people's wishes while also being able to prevent outbreaks of violence. Temel also touched upon the fact that HÜDA PAR aims to ensure that everyone with varying opinions is given a chance to express themselves. HÜDA PAR is a Kurdish-based conservative political party which was founded in December 2012 in southeastern Turkey.

With a focus on the preservation of democracy along with Islamic and humanitarian values, the party aims to resolve the Kurdish question, emphasizes social justice as well as fundamental human rights and has been targeted by the PKK for its moderate and democratic stance.
According to the latest information, Alparslan was released.
Last Update: Jun 02, 2014 5:35 pm
RELATED TOPICS