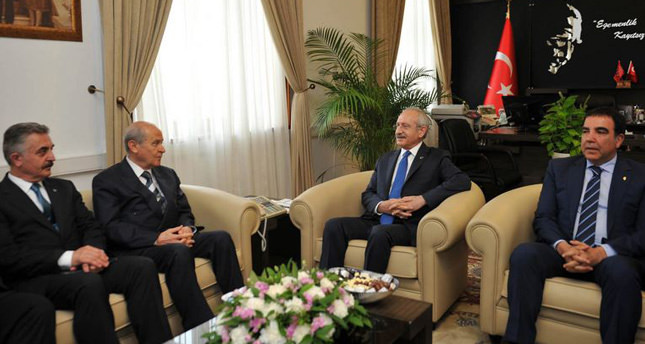 by AA Jun 02, 2014 12:00 am
ANKARA — Turkey's main opposition Republican People's Party is looking for "the most embracing name" who will appeal to the largest portion of society ahead of the country's August presidential election.

It is necessary for the opposition CHP to consider a popular candidate with widespread appeal, as the ruling Justice and Development Party (AK Party) of Prime Minister Recep Tayyip Erdoğan enjoyed a strong victory in March's local elections - taking more than 40 percent of the vote, according to opposition officials.

Stressing the importance of characteristics of the upcoming president Tezcan continued: "I believe we will all together select a presidential candidate who suits this Republic, the peace and brotherhood culture of these people and [that] people will give approval to [him /her]."

Erdogan is looking increasingly likely to become the ruling AK Party's candidate in the August 10 poll-the first time Turkey's president will be directly elected by the public since the founding of the Republic in 1923.

The Nationalist Movement Party and the pro-Kurdish People's Democratic Party are continuing to discuss their candidates.

The pro-Kurdish HDP, although politically aligned with the Peace and Democracy Party- another pro-Kurdish group whose entire parliamentary caucus joined the HDP on 28 April - was established with the aim of winning broad support across Turkey and becoming an influence in national politics.

Even though the HDP is not regarded as a serious challenger to the AK Party, party sources said they regard the presidential polls as a testing ground for the general elections scheduled for 2015.

The profile of a possible candidate drawn by the HDP would be one that would draw in both leftists and conservatives, in addition to core Kurdish voters from the BDP. The party is also open to nominating a female candidate.

Sources close to the HDP are more neutral on the concept of a presidential system in Turkey than other opposition parties, as long as they feel that regional supervisory systems are strong enough to monitor the national political machine.

A candidate will need more than 50 percent of the popular vote to be elected in the first round. If no candidate receives the required percentage, there will be a second round on August 24 between the two candidates who received the most votes in the first.