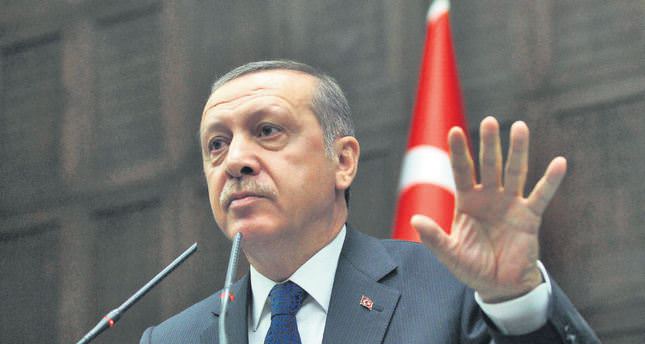 The prime minister tells his deputies that the suffering of families whose children were kidnapped by the PKK is the BDP and HDP's fault, calling on them to take responsibility

ISTANBUL — Prime Minister Recep Tayyip Erdoğan, speaking to his deputies yesterday, criticized the pro-Kurdish Peace and Democracy Party (BDP) and the People's Democratic Party (HDP) for abandoning families whose children were kidnapped by the terrorist PKK, accusing them of serving their own interests rather than those who elected them. He also said Sunday's re-elections are an indicator that the option of a joint presidential candidate has collapsed. He evaluated the re-elections held in 14 electoral regions, stating that the
AK Party won in five electoral regions.

He added that the main opposition Republican People's Party (CHP) and the Nationalist Movement Party (MHP) each won three regions, while the Peace and Democracy Party (BDP) won two regions and the Felicity Party (SP) won one region. "The AK Party garnered 43.05 percent of the vote in the March 30 local elections and received 45.5 percent of votes on Sunday's elections, which means our votes saw a 2.5 percent increase compared to March 30 in those 13 electoral regions," Erdoğan said.

The prime minister added that the CHP's votes increased by 1 percent while the MHP saw a 1.9 percent decrease in its voting rates. "We of course analyzed the outcome in the Yalova and Ağrı electoral regions. We evaluated the outcome in all aspects. We suggest that the CHP and MHP take their lessons from Sunday's mini elections. The MHP denied its ideologies and politics once again in Sunday's elections," the prime minister said.

Citizens in Turkey's 14 electoral regions went to the ballot box on Sunday after the Supreme Election Board (YSK) cancelled some of the results of the March 30 local elections. Marked as strategic electoral regions, Turkey's northwestern city of Yalova and eastern city of Ağrı saw a heated race between mayoral candidates.

Erdoğan stated that no other party aside from the AK Party competed with the BDP in eastern Turkey, which is an indicator that the CHP and MHP's political ideologies do not embrace people living in the eastern region. "They want to carry out politics on the grounds of winning in cities and provinces that are in accord with their own ideologies," Erdoğan said about the CHP and BDP Touching on last week's demonstration on the first anniversary of the Gezi Park protests, Erdoğan accused the CHP of provoking young people and urging them to take to the streets. "CHP's provincial chairmen, especially in Istanbul and Ankara, logistically supported to take young people to the streets and called on them to clash with police officials," said Erdoğan.

On the first anniversary of the start of the Gezi Park protests, several deputies from the CHP and the People's Democratic Party (HDP) demanded that the police let them march to the square. After the police refused, the groups clashed with security forces and tried to break the barricade. In response, riot police dispersed them using tear gas and a water cannon.
RELATED TOPICS