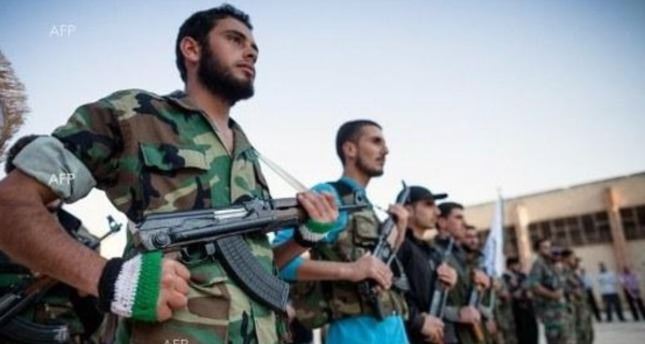 Turkey designates al-Qaeda affiliated Nusra Front as a terrorist group, mobilizing all resources to fight the security threat posed by the group

ANKARA — Turkey has added the al-Qaeda-affiliated Jabhat al-Nusra, fighting in Syria against the al-Assad regime and other opposition groups, to its list of terrorist organizations, under a recently passed bill preventing the financial endorsement of terrorism. The decision was announced by the cabinet on Tuesday. The Nusra Front presents itself as a group affiliated with al-Qaeda, however, comprises Syrian people and aims to topple the al-Assad regime to establish a new regime, governed under strict religious jurisprudence. The organization is ruled by Abu Mohammed Al Jawlani, about whom there is very limited information. The organization not only fights with regime troops but also with other opposition groups, including the only legitimate opposition group Free Syrian Army (FSA) which seeks a democratic Syria in the postwar era and attempts to establish its own regime.

The Nusra Front denied the legitimacy of the Islamic State of Iraq and the Levant (ISIL), which was previously affiliated with al-Qaeda, and wanted the group to declare its obedience to Al Jawlani. Yet, ISIL rejected this demand and the two groups declared war on each other. ISIL dismantled itself from the globally established al-Qaeda organization which is recognized as a terrorist organization by a large number of states, including the U.S., EU countries and Turkey. After the Nusra Front claimed that it was the only al-Qaeda branch in Syria, ISIL denounced Nusra fighters as apostates.

Last year the Nusra Front fought against the Free Syrian Army (FSA), whose members are moderate and aim to establish a democratic regime in Syria after the war. The Nusra Front and the FSA, which is the only legitimate opposition group according to Turkey, the U.S. and EU member states, have stopped fighting in certain areas and even improved cooperation against the regime troops. Yet, since the conditions for cooperation differ in various fronts and the Nusra Front is not directly conducted by one central power, the cooperation remains limited, according to a Daily Sabah source in Syria.

Another Daily Sabah source from the Turkish government said that despite the positive messages delivered by the Nusra Front about protecting civil rights and respecting different beliefs, the group's actions on the ground vary, implying that the Nusra Front's operations cannot be considered simply legitimate war activities.

The source stated that the Nusra Front's operations are harmful for the FSA in Syria as the group wants to take power and control the whole of Syria yet does not allow the other groups to live according to their religious faith. The source also said that the Nusra Front, which is active near the Turkish border, has gradually become a threat. One of the Daily Sabah sources, criticizing the government policy, said that Turkey failed to clarify its stance toward the Nusra Front and said that the U.S. and the U.K. listed the group as a terrorist organization on Dec. 2012, when its fighters increased their presence in the region.

Turkey's decision ignited anger among the supporters of the Nursa Front, according to Daily Sabah's observations on several websites and social media accounts. Supporters of the group highlighted that Nusra is one of the organizations that carries out municipal and judicial activities in cities captured by the group's fighters. Pointing out that Nusra fighters consist largely of Syrians, in contrast to ISIL whose fighters are generally foreigners, it is said that the Nusra Front delivers clean water, electricity and establishes schools for children, mobilized bakeries and hospitals. Yet, the other figures loyal to other opposition groups claim that the people can benefit from these facilities as long as they declare their obedience and loyalty and reform their lifestyles under the boundaries drawn by the Nusra Front.
Turkish officials disagree with loyalists of the Nusra Front and claim that the group undermines the legitimacy of the opposition. The FSA, which has offices in Turkey's Istanbul, Washington, D.C. and London, is the only group in Syria to hold talks, according to Turkey and Western countries. Turkey has also designated ISIL a terrorist organization although the Turkish Parliament has not added the organization to the terrorists list as ISIL is not considered a separate group or entity yet.
Last Update: Jun 04, 2014 10:22 am
RELATED TOPICS