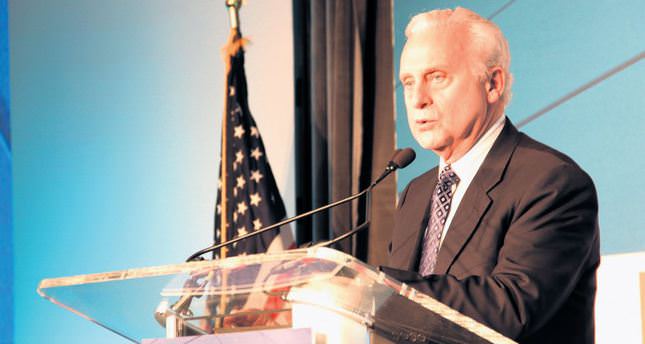 by Daily Sabah Jun 05, 2014 12:00 am
ISTANBUL — U.S. Ambassador to Ankara Francis Ricciardone said that he does not believe Turkey faces the risk of regression.

On Tuesday, Ricciardone attended the 33rd Annual Conference on U.S.-Turkey Relations: A critical partnership for a changing world, which is organized by the American-Turkish Council (ATC) in Washington D.C. Giving a speech at the closing reception as a keynote speaker, Ricciardone stated that even though Turkey and the U.S. were different from each other in terms of their geographical locations, cultures and histories, they complement each other, especially in dealing with strategic issues.

Riccardione highlighted the importance of cooperation between the two countries on regional issues, such as the civil war and the humanitarian crisis in Syria, Iran's search for nuclear weapons, issues in Iraq and reconciliation efforts in Cyprus. With regards to certain news alleging that there are problems in U.S.-Turkey relations, Riccardione said that Turkish media outlets do not see the business cooperation or official talks that Riccardone has witnessed in person. Riccardione stated that there are certain controversies in Turkey in terms of limits to freedom of expression and the balance between the protection of privacy and government security and the public's right to be informed on these issues. He added that Turkey would reach decisions on these issues on its own.

On Monday, James Holmes, retired U.S. Ambassador to Turkey and president of the American-Turkish Council (ATC), announced his resignation at the conference. Holmes was recently criticized by columnists Ali Bayramoğlu and Etyen Mahçupyan at a meeting organized by the Foundation for Political, Economic and Social Research (SETA) in Washington, D.C. when he responded to a question about Turkey's democratic ranking by stating that on the one hand Turkey was democratizing, but on the other hand, moving away from democracy due to Prime Minister Recep Tayyip Erdoğan. Adding to the tension, Holmes claimed that his unexpected resignation was due to the Turkish government's attitude toward him. In a recent statement, the Turkish Embassy in Washington stated that such claims did not represent the truth. Embassy spokesperson Aydan Karamanoğlu noted that the ATC has been a corporation-based organization for 33 years and that there may have been disagreements about some issues, but the claims that he was pressured to quit are out of
the question.

U.S. Ambassador to Ankara Francis Ricciardone said Turkey's democratization had its own momentum that could not be stopped, praising the partnership between Turkey and the U.S. the same day John Bass was named as his replacement
RELATED TOPICS