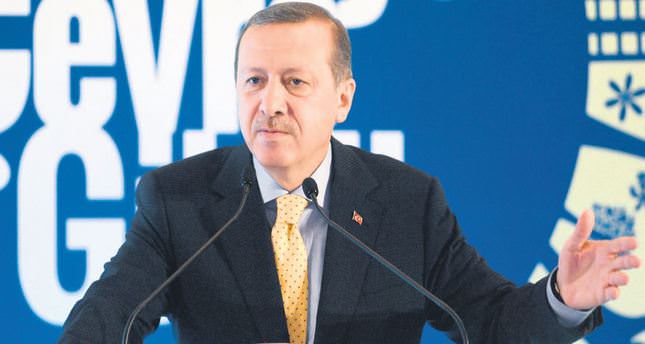 ISTANBUL — The Turkish government has implemented many EU environmental standards on a wide scale but the standards achieved are still not enough as Turkey is paying the price of years of environmental neglect. "While on the one hand we try to fix the mistakes made in the past, on the other hand we strive to construct new projects befitting our history and culture and we need a mental transformation in terms of our understanding the essence of human-environment relations," said Erdoğan, claiming that constructing the cities of the future was only possible with the existence of the heritage of the past.

Likewise, the prime minister insisted that his government wants to construct cities with spirit rather than those composed of concrete and metal. "Our goal is to build cities which will serve as an inspiration for poets, painters and composers and serve as a source of inspiration for architects, engineers, urban planners and environmental planners throughout the world," he said, adding that the building of such cities would be the day our civilization would revive itself and this was the sole mentality behind the government's initiatives to clean the air, water and soil.

Erdoğan claimed that when the AK Party came to power in 2002 the skyline of Istanbul mostly consisted of squatter settlements, had serious water and waste management problems along with air pollution. "Some newspapers used to distribute masks back in the 1990s,"
Erdoğan said, underlining the severity of air pollution mostly caused by the use of coal instead of natural gas. He stated that his municipal government addressed most of these problems at the time and the current administration continues to do so.

The current administration works in cooperation with the metropolitan municipality of Istanbul to make the city one of the most beautiful, attractive and developed metropolises in the world through environmental planning, planting of trees, flowers and new parks.

Turkey has made significant progress in terms of its environmental initiatives in the past 12 years, Erdoğan claimed, explaining that the number of solid waste landfill sites has increased from 15 to 76, which serves 70 per cent of the people, while the government aims to increase this number to 100 percent by 2023 along with the number of waste water treatment facilities.

Explaining that almost three billion trees have been planted since the AK Party came to power, Erdoğan said they continue to plant more. "Previously, people were fooled by uncivilized storage facilities but we introduced contemporary storage techniques which have enabled us to produce energy and compound fertilizers. This in turn will enable us to provide our parks and environment with the necessary fertilizers and we also strive to acquire energy in the same manner," said Erdoğan, thanking all engineers and workers involved in the matter.

The ceremony was attended by İdris Güllüce, the minister of environment and urban planning; Emrullah İşler, the deputy prime minister, as well as Veysel Eroğlu, the minister of forestry and water affairs. Güllüce gave the 2,711,000,001st tree to Erdoğan as a symbolic gesture for him to plant.

Turkey has made significant progress on environmental issues as more politicians pay attention to the importance of the environment.

According to the European Commission's 2013 progress report, Turkey has successfully brought landfill facilities up to EU standards as sorting and recycling capacities have increased; while in terms of water quality, relevant legislation was adopted on river basin and surface water management.
Last Update: Jun 06, 2014 4:18 pm
RELATED TOPICS