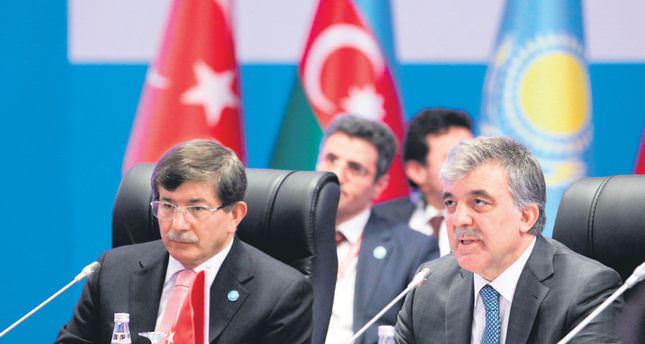 by Daily Sabah Jun 06, 2014 12:00 am
BODRUM — At the fourth Summit of the Cooperation Council of Turkic Speaking States (CCTS) held in Bodrum yesterday, Minister of Foreign Affairs Ahmet Davutoğlu remarked on the unity of Turkish speaking people throughout the world and lauded the progress made by the Turkish Council. "Turkish speaking societies, the people, our governments and the world make up a single nation living under different states,"

Davutoğlu stated, expressing that his ministry appreciates the progress achieved by the council in utilizing the strong linguistic, religious, historical, cultural and common ties between Turkic speaking countries.

Touching upon the tourism theme of this year's summit, Davutoğlu noted tourism is valued for more than just its economic considerations. "We consider tourism to be a field of activity enabling the rejuvenation of cultural ties between our people who have kept the same language and share the same cultural traditions and customs in different parts of the world," the minister said, underlining the idea that tourism serves as a contributing factor to world peace through promoting communication and dialogue between different cultures as well as a potential field of cooperation.

Touching on Turkey's recent membership to UNESCO's World Heritage Committee, the foreign minister underlined the fact that the rich ideas and art works of Turkic speaking societies have been transferred and continue to be transferred from the East to the West through the Silk Road. He claimed that the membership of Turkey to the committee meant all Turkic speaking countries would be represented and their common cultural values would be protected and developed.

Davutoğlu also emphasized that the unity of Turkic speaking people was not against any country or bloc and does not entail a competitive mentality. "We all come together for peace and stability and we will continue to work together for the prosperity of our people until we achieve this stability," he said, adding that the Turkish Council would revive historical job opportunities in Eurasia. The Cooperation Council of Turkic Speaking States was established in 2009 as an international intergovernmental organization by Azerbaijan, Kazakhstan, Kyrgyzstan and Turkey.
RELATED TOPICS