Public and government ready for reconciliation, PKK out of touch 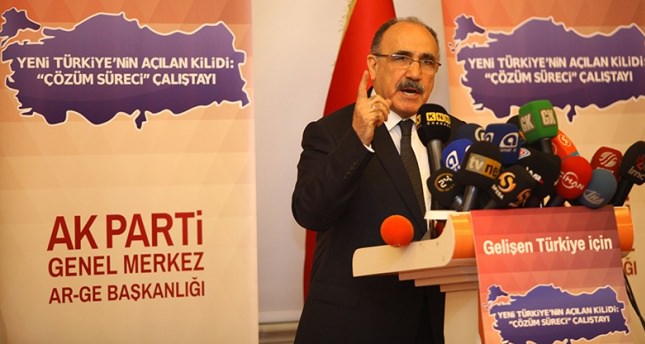 ISTANBUL — A workshop, the reconciliation process: Unlocking the New Turkey, was organized by the Justice and Development Party (AK Party) on Friday in Diyarbakır.

Academics, nongovernmental organizations, deputies and ministers gathered to analyze the current situation of the Kurdish question in Turkey. Deputy Prime Minister Besir Atalay and Interior Minister Efkan Ala addressed attendees, with both politicians emphasizing the fact that resolving the Kurdish question was made possible by new approaches and rhetoric adopted by the government in the past 12 years. Speaking at the workshop, Atalay touched upon the protests organized by mothers of children who have recently been kidnapped by the PKK, which is recognized as a terrorist organization by the U.S., EU and many others. "Those in charge of the reconciliation process are going through a test of sincerity," said Atalay, who added that the mothers have challenged the status quo in the region by demonstrating against the PKK and raising their voices, constituting the start of a revolutionary era.

Atalay underlined that he considers the protests to be of crucial importance, as they constitute a societal reaction, a civilian and societal initiative and an innocent incident with sincere intentions. He said the new roadmap would be a historic one leading to concrete results and that Parliament would make the necessary legal arrangements. The sit-in protest of mothers in Diyarbakır was a late clamor said Atalay, who indicated tens of thousands have lost their lives and condemned the Municipality of Diyarbakır for making things difficult for the mothers by attempting to stop their protests, while he criticized Peace and Democracy Party (BDP) Deputy Chairman Selahattin Demirtas for claiming that the mothers were paid to protest by the National Intelligence Organization (MIT). Atalay stated that it is crucial to make sure that everyone involved in the reconciliation process adopts an honest, sincere and just attitude and that failure to do so would result in the failure of the process. "Leave aside the stereotypical mindset,"

Atalay added that the government will always utilize the mind and conscience when making decisions, which he claimed was the only way to resolve the Kurdish question.

Interior Minister Ala also made significant remarks and touched upon the significance of the reconciliation process. Ala stated that the work of the Committee of Wise Men has revealed everyone's conscience speaks the same language regardless of his or her ethnicity. "The mothers came into play when we took further steps in the resolution of the Kurdish question, and this was when we realized that all mothers cry in the same language," Ala said, noting that the government is obliged to use constructive language to ensure that the process is not sabotaged by perpetrators. Noting that he has no doubt about brighter days being ahead in Turkey's future, Ala stated they believe they will resolve the issue as long as they continue their determined stance and the nation continues to support the government. "We will resolve this issue," said Ala, who claimed they will resolve it by respecting the rights of others in a collaborative manner without making secret plans behind the scenes and in a manner that is befitting the nation and Turkey's history. Ala remarked that the title of the workshop summarized the issue, as the paradigms, habits and reflexes of the Old Turkey would not allow for a resolution of the issue as he claimed, "The old Turkey was fed by conflict and violence," and explained such closed systems have cost societies and had negative implications for their wellbeing. "We cannot resolve our problems if we do not construct the new Turkey, establish its new codes and approach issues through different paradigms," said Ala. Ala said they would like to create a democratic Turkey where all thoughts are set free from fear, which makes up the basis for the reconciliation process.
RELATED TOPICS