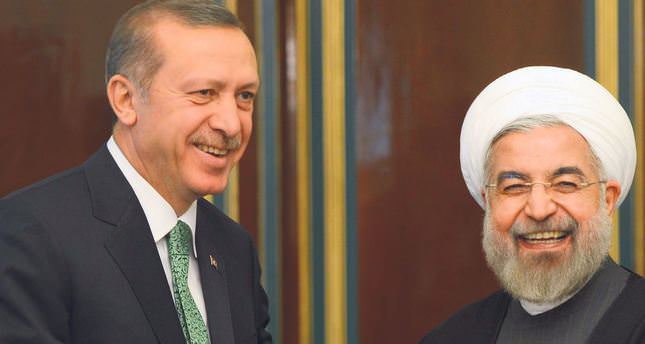 by Ali Ünal Jun 07, 2014 12:00 am
Since the establishment of the Republic of Turkey and the Islamic Republic of Iran, the relationship between the two neighboring countries has generally been peaceful. While both countries have historically approached each other with suspicion. This time things appear to be different as the two countries are willing to overcome suspicion and would like to strengthen ties.

Iranian President Hassan Rouhani will pay a working visit to Turkey on Monday and meet with President Abdullah Gül and Prime Minister Recep Tayyip Erdogan. A large delegation will accompany Rohani. Last January Erdogan visited Iran and called for expanded ties between the two countries. Since then the foreign ministers from the two countries have met on several occasions.

According to Dr. Bayram Sinkaya an expert on Iran issues from Yıldırım Beyazıt University, this visit is very important for both Turkish-Iranian relations, and Iran's Middle East policy. "Turkey-Iran relations gained new momentum after the election of Rouhani. Ankara had started to view the outgoing Ahmadinejad government as a destabilizer in the region. Additionally tense relations between Iran and Western countries, in addition to fierce competition between Iran and Saudi Arabia, had prevented Turkey from building relations with Iran. Unlike his predecessor, Rouhani promised moderation and to contribute to regional stability. Furthermore, Rouhani speaks a language similar to the AK Party leadership in terms of "win-win policy," mutual interdependence, regional stability, economic prosperity, et cetera."
Foreign Policy Expert Abdullah Yegin from SETA Foundation in Ankara also emphasized the importance of the visit. "This visit is important in that Rouhani is coming to Turkey for the first time after his being elected president. It is a plain fact that after the election of Rouhani, there has been an obvious development in the relationship between the two countries. In this visit, which was actually planned to be actualized much earlier than this but was then postponed, a variety of binary, regional and international issues will be discussed," Yegin remarked.

During the visit, regional and economic issues are expected to top the agenda. Yegin stated that Turkish businessmen's investments in Iran, the augmentation of trade volume between the two countries, such as the purchases of natural gas and petrol; the Syrian conflict, Ukrainian conflict, transfer of Iran's natural gas to Europe through Turkey; and the process of planning quadruple negotiations between Turkey, Iran, Azerbaijan, and Georgia are expected to be discussed. Moreover, during this visit Turkey and Iran will hold the first session of the High Level Cooperation Council. Dr. Bayram Sinkaya, an expert on Iran issues, told Daily Sabah that in the past such a step would have been unthinkable. "By these steps, Ankara is trying to help and promote Rouhani's position in Iranian politics as well. It is known that Tehran has a complicated decision-making process and this system could easily paralyze Rouhani. So, the more he is successful in foreign policy, the more he is expected to enlarge his government's maneuvering capability."

Yegin also drew attention to another aspect of the visit "This visit specifically concerns Iran and Rouhani the person. In the recent times, Rouhani [was involved in] some inside conflicts with conservatives. The most important reasons why Rouhani is tolerable in the eyes of the conservatives are his possible successes in foreign policy and the expectations that he may pave the way to a financial recovery.

Sinkaya argued that Rouhani has a new vision in foreign policy and for the Middle East. "Before he came to power, Iran was considerably isolated in the region and was further threatened by the civil war in Syria, instability in Iraq and Hamas slipping away. Now, the Rouhani government wishes to return as a strong country and neutralize any challenge to Iranian security. In this regard having consolidated its strategic relations with Syria and Iraq, it is trying to reach out to Gulf countries and tone down regional polarization," Sinkaya remarked.
Notwithstanding the positive atmosphere of the visit, Turkey and Iran have different approaches on the Syrian conflict. According to Sinkaya it is not easy to change Iran's Syria policy. "It is stated by some Iranian officials that Iran's policy on Syria was determined by the Supreme Leader [Ali] Khamenei, so it is not easy to change that policy. On the other hand, most Iranians, Iranian nationalists, consider 'attacks against Assad' as attacks on Iran. It seems that both governments recognized their differences regarding Syria, and [are no longer pushing] the other to change its policy."

Yegin shared a similar opinion. "When the two sides' decisiveness in preserving their current position is taken into consideration, there seems no reason to expect an important change in the short run. For instance, the presidential election in Syria which is seen as illegitimate by Turkey, is seen as legitimate and reliable by Iran, showing the gravity of the deepness of the two countries' clash of ideas. In addition to this, the fact that only the two most powerful countries in the area, Iran and Turkey can solve the Syrian conflict by developing a collective resolution automatically confers responsibilities to both sides. Because this responsibility forces the two sides to take common steps, a will of collaboration may emerge in the medium term."

Even though Rouhani displayed an attitude clearly emphasizing the importance of dialogue and he started negotiations with the West, both experts do not expect a radical change in Iran's foreign policy. According to Sinkaya this assumption is based on two observations. "First, some structural and strategic factors delimit Iran's capacity and capabilities.

Second, the complicated decision making process in Iran prevents any radical change. Yes it is true that Rouhani has a new foreign policy vision considerably different from Ahmadinejad. Yet, the negotiations between Iran and the P5+1 will be a test case for the Rouhani team. If they succeed in concluding an agreement matching Iran's demands with this new approach to the nuclear file, they will be free and encouraged to make some drastic changes in foreign policy. If they fail, Iran's foreign policy will continue to be determined by the [Supreme] Leader Khamenei and practiced by bureaucratic and security institutions, in which politicians will serve as only front heads."
Yegin also weighed in, "Of course in Rouhani's time Iran seems to have passed to a more intimate and dialogue-based foreign policy process. It is true that he exerts his efforts so as to improve relationships with the regional countries. However, it is not possible to mention that he preserves this basic perspective while performing this. In Iranian foreign policy, probable alterations do not reveal themselves in primary approaches; but with strategies which enable financial collaborations. In the end, the doctrinal stance and primary lines are not determined by the president, but by the religious leader, and this leader regulates the primary policies through the High Security Counsel."
RELATED TOPICS