Forests are one of the leading natural wealth of our country 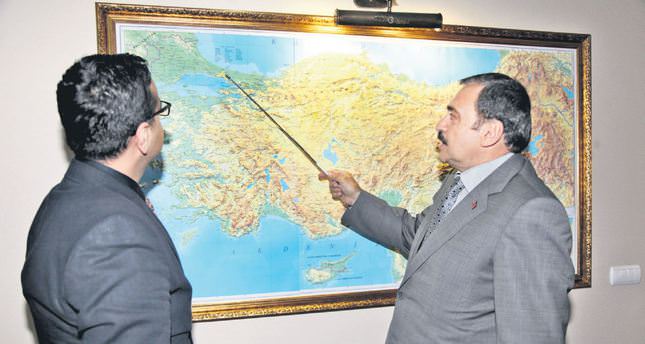 Over the last couple of years, there has been a noticeable increase in environmental awareness in Turkey. In accordance with this shift, considerable criticism is being leveled over the construction of a third bridge across the Bosporus and a third airport in Istanbul, along with hydroelectric power plants across the country and the destruction of forests. To find out more about the latest environmental developments Daily Sabah sat down with the Minister of Forestry and Water Affairs, professor Veysel Eroğlu.

Last year, when the Gezi Park protests started you said: "If there is a tree cut down there, maybe we will plant 100 more.
There is no reason to worry." One year on, what is the count of newly planted trees in Istanbul?

The reason for the Gezi Park protests was not the cutting of trees. They [the protestors] expressed it by saying, "The matter isn't about trees, don't you get it?" These numbers also reveal that this isn't a matter of trees. We claim that, we are the most environmentalist and tree-planting government in the history of the Republic of Turkey.

In the past 10 years, how has Turkey's forested lands improved? Is Turkey a poor country when it comes to world forest standards?

Forests are one of the leading natural wealth of our country. Especially with the work done in the recent years, our forests are both preserved and have increased in area and number. The country's surface area is covered by 27.7 percent of forested land; 52 percent of our forests are fertile and 48 percent are degraded. We are spending a great deal of effort to pull this percentage up with our afforestation efforts, which are either continuing or done especially in recent years. Our aim for 2023 in forestry is to increase the proportion of forested lands to 30 percent of the surface area of the country.

We have crowned our successful afforestation efforts with the National Afforestation and Erosion Control campaign which was started in 2008. Spurred on by our Prime Minister Recep Tayyip Erdoğan in Istanbul on Jan. 1, 2008, we completed this campaign by the end of 2012.

In accordance with the campaign completed between 2008 and 2012, we have surpassed our initial aims of afforestation, prevention of erosion and betterment of forests in 2,429,000 hectares of land; instead of the projected 2,300,000 we have planted 2 billion saplings. This afforested land is approximately equal to the surface area of Belgium.

Over the last 11 years, we have planted more than 3 billion saplings. Our forested lands reached 21.7 million hectares. We have transformed 900,000 hectares of land, which is 9 million decares, to forested land. The annually afforested area became almost sevenfold what it was before 2003.

In past months, the numbers that you have given regarding afforestation were criticized with assertions that this many trees cannot fit into the given surface area. Could you clarify this issue?

Unfortunately, some people had a hard time comprehending these numbers. Let me explain: Turkey's surface area is 780,000 square kilometers. If it is converted to square meters, it makes 780 billion square meters.

They made a mistake when converting square kilometers to square meters. With this mistake, it is easy to not understand [the numbers].

What is your comment on allegations that forests were "massacred" during the construction of the third bridge?

In order to construct Yavuz Sultan Selim Bridge and the Northern Marmara Motorway, 2,542 hectares of forested land was permitted, however, only 706,92 hectares of it will be used as a motorway platform. Trees will be transported whenever possible to other places and the General Directorate of Highways will plant fivefold the number of saplings cut trees when transportation is not possible.

While prior authorization is given for the construction of the third airport on 6,173 hectares of forest, there is no clearing done at the moment. In 70 percent of this area, there isn't any forest cover.

Also, contradictory to the allegations, there isn't any natural lake around the area. Bodies of water that are mentioned as lakes or ponds are the result of mining activities in the aforementioned area. As the ministry, we already had plans to rehabilitate these superficial ponds, which may prove harmful to public health.

There are many critiques of hydroelectric power plants concerning the destruction of nature. What are your comments on this subject?

River HPPs [hydropower plants] create electricity using the natural flow of water and are actually the improved version of watermills.
River HPPs don't demand a great amount of water, thus this is the main reason they are identified as "environment friendly."

A typical 26 megawatt river power plant creates 80 million kilowatts of green energy, and this is equal to 47,000 metric ton of carbon dioxide, or in other words, the removal of 9,000 vehicles from the roads. The HPPs being completed will decrease greenhouse gas emissions substantially.

To produce 1 kilowatt hour of electricity using coal, 0.955 kilograms of carbon dioxide is released into the atmosphere. When oil is used that number is 0.893 kilograms, when natural gas is used the measurement is 0.599 kilograms.

If half of the potential of the economically constructible HPPs all around the world could be employed, this would result in a decrease of greenhouse gas emission by 13 percent.

The allegations that HPP projects make the rivers dry and cause drought are completely unfounded. In HPP facilities, sand and pebbles in the water are sorted out in order to prevent damage to the turbines, sediments are precipitated, thus the water comes out of the turbines cleaner than its natural form.

To what is extent is drought facing the country? Is there a chance that metropolises, especially Istanbul and Ankara, are going to be without water this summer?

There has been a 20 percent decrease in rain water throughout Turkey. Therefore, we have taken the required measures on the matter. We had prepared a course of action for drinking water. We will not leave any city without water. We have many alternative plans and we are thinking ahead. The water reserves at our dams are adequate. In addition, 700,000 cubic meters of water is provided to Istanbul from Melen. We have taken the required precautions.

Residents of Istanbul have nothing to worry about for a water shortage. We even have plans in case of a threeyear drought. Turkey has become a country that provides information and technology regarding water to other countries. The required precautions to provide all of our cities with adequate drinking water have been taken. There is nothing to worry about. However, we expect our citizens to use the water efficiently.

The environmental chapter, which is one of the most challenging chapters of the EU accession process, was opened by your ministry in 2010. What has been done in this field during the last four years?

After the opening of the environmental chapter, environmentally friendly products and technologies became widespread and by this an efficient production has become possible in the industry. Usage of renewable sources of energy was encouraged and regulations, which aimed to minimalize the negative impact of the demanded energy on the environment and the subject of climate change's integration to industry-specific planning processes, were sped up.

The struggle against climate change is not an issue that can be solved by any country alone. In this struggle, we are showing effort on both the national and international levels. International meetings are attended by both the president of the republic and the prime minister, at the highest level, and the developments are observed closely.

In 2010, our president attended the 65th U.N. General Assembly and our prime minister attended the Mediterranean Climate Change Initiative in Greece. I also attended to both these meetings and the meeting in Cancun, Mexico, which bore successful results for our country. In these meetings, we explained our special condition about decreasing greenhouse gas emissions. Our country became a signatory to the United Nations Framework Convention on Climate Change after our special conditions were recognized.
Turkey is an Annex-1 country and a member of the OECD. However, when compared with other Annex-1 countries, Turkey's historical summary of greenhouse gas emissions is on a lower level.

Actually, Turkey's share of historical global greenhouse gas emissions is only 0.4 percent. Our fundamental request in longterm reduction and harmonization activities is that national and regional factors, and especially economic and social development, should be considered.
Turkey is in a fast-growth process. Increases in annual averages of energy demand are about 7 to 8 percent. During the development process, an increase in our country's long-term energy need is normal. For this reason, predicating on any year to aim for a reduction in emissions isn't realistic. In accordance with this, we have made a statement that lays out our genuine conditions.

With the Cancun Agreement, Turkey's different conditions were compared to other Annex-1 countries and were recognized by all other countries.

The Cancun Agreement is the most important success of our country after the Marakesh Summit in 2001, in which our special conditions were recognized. In this crucial success, being a signatory to the Kyoto Protocol in 2009 has a prominent role in this success.
We have become a signatory to the Kyoto Protocol… and we continued our efforts in other subjects such as energy, industry, transportation, forestry and waste management.

In 2002, waste treatment plants served only 35 percent of the municipal population, 20 percent of which are due to the developments done by our prime minister who was the mayor in that period. Today, waste treatment plants serve 74 percent of the municipal population.
Solid waste disposal plants were numbered at 15 facilities in 150 municipalities for 23 million people, while today they serve with 76 facilities in 1,010 municipalities to 46.5 million people.

Our air is cleaner. In 2002, there were 16 measuring stations, today there are 169. In 2002, nine cities were provided with natural gas; however, today there is almost no city which doesn't have natural gas.
RELATED TOPICS