Order to burn Gezi Park tents was given by controversial name, investigation reveals 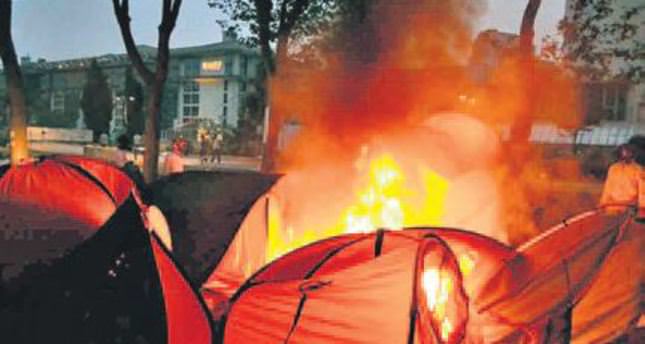 ISTANBUL — The order to burn the tents of Gezi Park protestors, which triggered months-long antigovernment protests nationwide, allegedly came from Deputy Police Chief of Istanbul Ramazan Emekli, suspected of having links to the controversial Gülen Movement. A detailed investigation by the Interior Ministry focused on the incident late in May last year when municipal police forces burned tents used by the protestors who occupied the park. Inspectors sought statements of police officers who were on duty at Gezi Park during the time of the events which took place between May 28 and 31, 2013. Police officers were asked who gave the orders to burn the tents as well as who torched the tents and why.

Police officers said that the orders were given by deputy chief of Istanbul police, Emekli. It has been reported that the director of police officers responsible for burning the tents was Murat Sarı, the commissioner at the Municipal Police Forces of the European side, who expressed he went to the park on May 30 and shortly evaluated the situation with police officers including Emekli. He claimed Emekli told him that they would try to disperse the protesters and then collect the tents, but tensions arose between the police and protestors when they collected the tents as protestors threw stones and bottles. "It was at this point when Emekli told us to stop collecting the tents and burn them" said Sarı, who said he and those police officers around him heard the order and some did as they were told. Sarı and his fellow police officers collected the tents and handed them over along with signed proceedings to the warehouse located in Edirnekapı.

The testimony of other police officers including Hüseyin Aladağ, Tolga Kurul and others confirmed Sarı's testimony as they stated deputy chief of Istanbul police Emekli had ordered them to burn the tents. Emekli has been removed from his position at Istanbul Police Department and was transferred to a police academy following the Dec. 17 operation for his alleged ties with the Gülen Movement.
The Gezi Park protests surfaced on May 27, 2013 as a reaction to a plan to redevelop the park next to Taksim Square. Prior to June 1, the protest was relatively small in scale and evolved around protecting the trees and environment in Gezi Park, but the tear gas provoked many from far-left groups to join the cause. A report prepared by the Interior Ministry has stated that the involvement of radical groups in the initially peaceful protests led to riots, implying terrorist organization DHKPC and fringe factions. According to the report, riot police prevented a brawl between municipality officials and protesters who set up tents in Gezi Park but protesters continued hurling stones and bottles at municipal crews.

The Gülen Movement on the other hand is accused of attempting to topple the government through a series of fabricated tape recordings, operations and their agents within government institutions.
RELATED TOPICS