Somalia's long-lost brother Turkey is here to rebuild the country 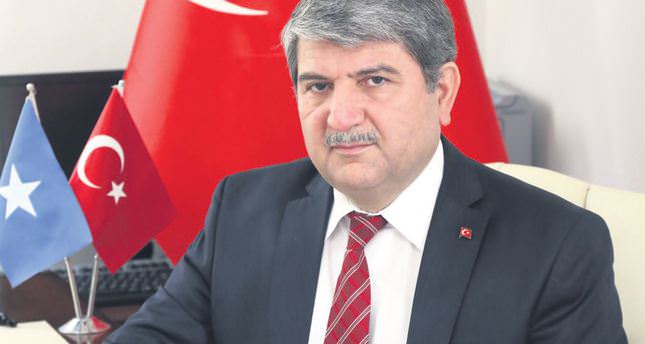 by Yusuf Selman İnanç Jun 10, 2014 12:00 am
MOGADISHU — As the Daily Sabah, we organized a trip to Somalia's capital Mogadishu, which is the most dangerous city in the world, according to the United Nations. In the country, which was ruined during the decades-long civil war that partially continues, we saw investments made by the Turkish government and Turkish NGOs. Although Turkey delivers humanitarian aid to dozens of countries around the world, Somalia is unique in that Turkey trains Somalis in areas from construction to the military. In an interview with the Turkish ambassador to Somalia, Kani Torun, we obtained information about the motivations behind the Turkish presence in the country and the threats posed by the al-Qaeda linked Bayt al-Shabaab, which targets Turks. The ambassador also discussed the facilities, projects and services carried out by Turkey.

What are the motivations behind Turkey's presence in Somalia, and why did Turkey specifically choose Somalia to make both humanitarian and financial investments?

Turkey has historical links with Somali dating back to the 16th century, the era of Sultan Süleyman the Magnificent. In some parts of Somalia, you can still see the heritage of the Ottoman Empire. The empire built water channels, castles and mosques.

But Turkey became interested in Somalia in 2011 when there was a deadly drought across the country that forced thousands of people to leave their homes and flee from the south to the capital Mogadishu.

Internally, displaced people needed food urgently. When this tragedy happened and the Somali government called on the world for aid, the Turkish government responded positively. Since the world ruined the country, the central government was too weak to cope with these problems. Moreover, the international community had left Somalia due to the war. On Aug. 19, 2011, Prime Minister Recep Tayyip Erdoğan visited Mogadishu with some members of the Cabinet and his family. His visit was historic. Somalis called the visit an icebreaker. After Turkey came, other international actors followed.

Our initial motivation to come was to help and deliver humanitarian aid to our Somali brothers. Turkish people donated as much as $300 million via both government institutions and NGOs. This money was used for humanitarian aid. After six months, namely April 2012, the U.N. announced that the famine was over. Following the announcement, we started services to develop the country while continuing the delivery of humanitarian aid.

Somalis, who have cultural and historical ties with us, needed help. Also, Turkey wanted to expand its influence, as we wanted to improve our bilateral relations with not only Somalia but also with other African countries for mutual benefit. We call this a win-win situation. Somalia is a part of this strategy.

That is why we started developing the country.

Can you please tell us more about the activities carried out by Turkey in Somalia?

Our activities focus on three main areas: humanitarian aid, helping in the development of the country and making financial investments to consolidate business.

We have never stopped the delivery of humanitarian aid, as the people are still in need of main nutritional goods and clean water. In terms of development, we work mainly on four areas: health, education, infrastructure and the establishment of institutional buildings.

We have built two hospitals so far. Another one is being built and will be in service in a few months. It will be one of the biggest hospitals in Africa. Another hospital is under construction and will be ready at the end of the year. We will build four more hospitals in different parts of Somalia.

In terms of preventing illness the Turkish Red Crescent and the Istanbul Municipality have initiated a project to clean up the streets, as the city was full of mountains of rubbish when we came here since the civil war destroyed not only buildings but also municipal services. We have cleaned the rubbish and water channels and placed rubbish bags. Our trucks collect rubbish daily to turn Mogadishu into a normal city.

We have built and opened four schools and two others just for orphans. One more will be opened soon. Additionally, we will build five more schools in several districts of the country. We are about to open a nursing school to train Somalis. We have selected 15,000 Somali students and given them full scholarships for their education in Turkey.

In terms of infrastructural facilities, we have built 86 kilometer-long roads - 22 kilometers of which have streetlights. This is huge progress for Somalia.

As soon as we came, we accelerated the renovation of the airport terminals. In March 2012, Turkish Airlines (THY) launched flights to Mogadishu. Before THY, there were no international flight from Somalia. Thus, THY is the only international airline company flying to Mogadishu. In a few months, the airport will be entirely renovated.

We are changing the image of Mogadishu through infrastructural facilities. Before our investments, no other country came here. The UK opened an Embassy and the U.S. is to open one. But their embassies will be in the airport complex. They still think that Mogadishu is a no-go area. Yet, we are changing this mentality. The Somali diaspora has started to come back and contribute to their country.

We also established governmental institutions by which I mean that we train Somalis and show them how to administrate ministries and security institutions and how to organize their work. Since the civil war destroyed everything, there was no government at all. But Somalia needs to be institutionalized. We are helping them to create these institutions. We train Somali police, intelligence and the military. Somalis are trained in Turkey in military academies to become colonels. Somalia will not need international forces for security in the coming years, as its army will be educated and well organized.

I would like to touch on business activities as well. We have encouraged many Turkish businessmen to come here to make investments. A Turkish company currently runs the seaport, and another one runs the airport. Somalis are very businessoriented people, and we want to set up free zones to increase trade and investments. If Turkish businessmen bring Turkish goods, Somalis can sell them all over Africa, since the country lies in a critically strategic position. I believe that the best aid is trade.

If we increase trade and create job opportunities for the people, they will not need humanitarian aid.

Despite Turkey's struggle to develop the country and better standards of living in Somalia, why does the allegedly al-Qaeda-linked group al-Shabaab target Turkey?

If we deliver only humanitarian aid, Shabaab does not touch us. But when we started supporting the government, establishing institutions and training the army, Shabaab announced that Turkey was its enemy for cooperating with its enemies, referring to the Somali government and NATO. Yet, the main motivation behind Shabaab's attacks is that Turkey's presence, investments and projects help Somalia to become stabilized both politically and economically.

The more people see that investments bring peace and stability the more Shabaab loses followers. Somalis understand that financial investments bring peace and prevent clashes. Therefore, they stop obeying and being loyal to Shabaab. Similarly, the PKK tries to sabotage road and airport construction in Turkey's southeast, since these developments bring stability to the region and destroy the loyalty of people. The Somalis prefer Turkey to Shabaab, as the group cannot offer any job opportunities or make any developments to better conditions.

Do you think Shabaab is the only actor that is disappointed with the Turkish presence? Is there any other regional or international actor that does not want Turkey to be in Somalia?

Shabaab is the main group that considers Turkey an obstacle to reaching their goals. However, some other international actors might be disappointed with Turkey's investments. The developments led by Turkey pave the way for a stronger Somali government. Some others may consider a strong central Somali government a threat for themselves. But Turkey insists that a peaceful and stabile Somalia is not a threat for the region. To the contrary, it will help the region. Yet, we do not compete with any other country. We are here to help Somalis, and we cooperate with the Somali government.

What is the future of Somali-Turkish relations? Are there more plans and projects to be made?

Somalia is divided into regions. Some of them claim independence. We have very good relations with all of them. Our relations are not limited to the central government. But we strongly support unity and the territorial integrity of Somalia.

For instance, Somaliland, in the north, claims independence, and we are a mediator between Somaliland and the central government. We will increase our investments in other regions as well. Political relations will be strengthened with Somalia.

We are about to complete several projects in Mogadishu. We will start projects in other cities in terms of health, education and other areas.
How do the Somali people respond to Turkey? Do they see Turkey as an imperial power?

We have very good relations with the people. We have huge popular support. The people admit that other countries came here because Turkey is here. They say that Turkey, a long-lost brother, came here to save us as they did before in history when the Portuguese navy attacked in the 16th century. Turkey bases its activities on mutual benefit and respects for Somalis. That is why they do not see Turkey as an imperial power or even compare it with other international powers.
RELATED TOPICS