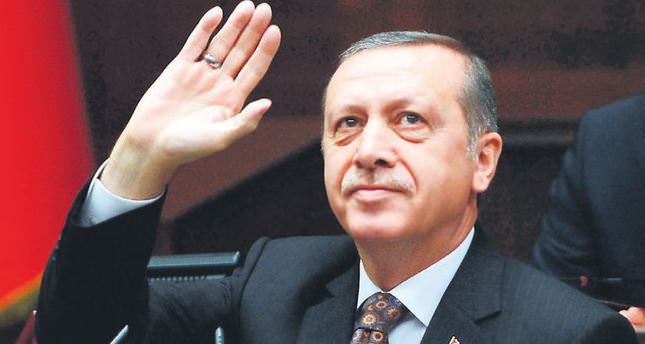 Removal of the Turkish flag in Lice, following days of violent demonstrations, are seen by the government and the jailed leader of terrorist PKK as clear provocations

ISTANBUL — Prime Minister Recep Tayyip Erdoğan, along with President Abdullah Gül and numerous other politicians and prominent figures have condemned an incident that took place on Sunday when a masked person in Lice, a district located in Turkey's southeastern Diyarbakır province, pulled down the Turkish flag at the air force command. Despite the incident, both Erdoğan and Gül said the provocations would not hinder the reconciliation process between the Turkish government and the Kurds. Speaking at the Justice and Development Party's (AK Party) group meeting yesterday, Erdoğan harshly criticized everyone involved in the incident and said the officials who were present when the flag was pulled down should have taken immediate action and were thus responsible."The soldiers and police cannot have any excuses," said Erdoğan, adding that nobody should fall into the trap of provocation, as the reconciliation process is progressing, while calling on people to avoid making accusations against the Kurds based on the PKK's actions.

"Neither the HDP (Peace and Democracy party) nor the PKK represent my Kurdish brothers and sisters," Erdoğan claimed, warning against provocation. Moreover, while he assured that the government would give a firm response to the terrorists, he stated there is a limit to their tolerance in terms of sabotaging the peace process by the terrorists through the exploitation of children. "We will have no pity on those who try to hinder the gains of the New Turkey," said Erdoğan, who warned the HDP to stay away from fascist leanings and conducting politics in the shadow of guns and violence, while advising the rest of the Kurdish people to turn a blind eye to provocations and believe in the reconciliation process to establish permanent peace.

President Gül also expressed similar views, as he condemned the incident through an official statement released on the website of the Presidency of the Turkish Republic. "The flag belongs to all of us, it is a common symbol and our most valuable asset," the statement read, indicating that such shameful attacks will never be able to achieve their goals. The president also called on people to act responsibly and stay away from making provocative remarks and actions.

Numerous figures including politicians have condemned the incident and indicated that such violent actions will not stop the reconciliation process, as the government is determined. M. Emin Ekmen, former AK Party deputy, said that the process would proceed as planned because both the government and the Kurdish side maintain a determined stance despite some opposition amongst Kurds. Ümit Fırat, a Kurdish writer, has called the incident "an attempt to crush the peace process," but said he has full faith that the government will democratically resolve the issue with its determined stance.

On the other hand Abdullah Öcalan, one of the founding members of the militant PKK who is currently serving a life sentence in İmralı Prison, recently met with representatives from the HDP and expressed his condolences for the two people killed in Lice. "We have never had a negative or offensive approach towards any nation's national values and symbols," Öcalan claimed, adding that the necessary institutions should immediately investigate the matter and announce its results to the people, while he repeated his call to carefully preserve the conflict and violence free environment until a permanent resolution is reached. "We are at a historical stage," said Öcalan, who said he has full faith that the process will succeed as everyone will show a determined stance toward overcoming the current issues and express a strong will to establish peace. Others have stated the incidents were planned to sabotage the violence-free era and claimed three top figures within the Kurdistan Communities Union (KCK) want to eliminate Öcalan from the reconciliation process while also touching upon the fact that the timing, which was right after the government indicated that it would like to take more concrete steps in the process was suspicious.

An investigation has been initiated by the public prosecutor's office in Diyarbakır to determine the identity of the masked individual who pulled down the Turkish flag at the air force command at the time of the protests when two men died after security forces intervened in an illegal protest held by a pro-Kurdish group who attempted to block the road between Diyarbakir and Bingol provinces, hurling hand-made grenades and stones at security forces aiming to fuel further protests amongst the Kurdish people.

Last Friday, the government conducted a workshop, "Unlocking New Turkey's Locks: A workshop on Turkey's reconciliation process," in Diyarbakir in efforts to analyze the current situation of the Kurdish question in Turkey and offer new solutions.

Currently, numerous politicians in Europe are working to remove PKK's name from the EU's list of terrorist organizations, arguing that the designation of the PKK as a terrorist organization prevents a political solution for the Kurds, as most of them claim the government cannot negotiate with an officially designated terrorist organization, despite the PKK's consistent efforts to discredit the reconciliation process through provocations and violence. "Öcalan has indisputable authority and leadership over PKK-BDP" Yılmaz Ensaroğlu, director of Law and Human Rights Research at SETA, the Foundation for Political, Economic and Social Research, he said yesterday. He added that a discharge of Öcalan was out of the question, while expressing it may theoretically be asserted that Öcalan turns a blind eye to such provocation in order to demand house arrest by claiming that he cannot control the PKK from prison. "However, considering Öcalan's highly pragmatic and realist personality and his efforts for the reconciliation process, I would not assume this would be the case" said Ensaroğlu. He also noted that the PKK's organizational attitude and Öcalan's response are not yet clearly set. Ensaroğlu also touched upon the fact that global examples of reconciliation indicate the government must be ready to face such provocation.

This is intertwined with the determination of both sides and the value they put on such violent incidents, which they may label as an accident or act as a force to speed up the process. "Despite everything, the society should not lose its faith and confidence in the reconciliation process due to such incidents," said Ensaroğlu. He also remarked that this particularly is the reason why such provocations are organized.
RELATED TOPICS