Clinton stresses importance of Turkey in her book 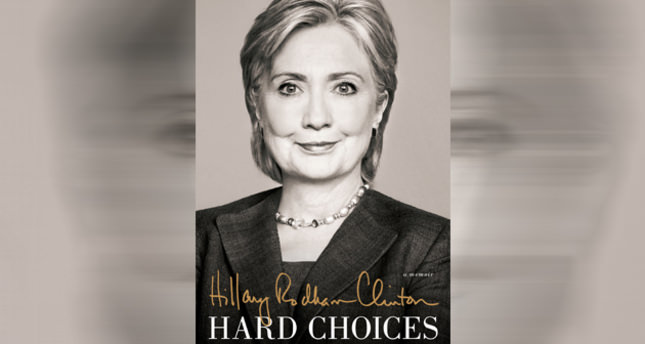 by Ragıp Soylu Jun 12, 2014 12:00 am
Former U.S. Secretary of State Hillary Clinton's latest memoir, "Hard Choices," provides a detailed insight into Turkish-American relations during the last four years and hinting at what would be Clinton's attitude towards Turkey if she becomes the first woman president of the United States in 2016.

As a first step in her secretary ship, Clinton was able to see the low favorable ratings of the U.S. in Turkey after the Bush years and stressed the urgency of an engagement with Turkey and planned a first-ever visit to Istanbul and Ankara in 2009. She described Turkey as a "power house" and gave great importance to Prime Minister Erdoğan, saying, "One main in particular held the key to the future of Turkey and of our relationship." The former first lady labeled Erdoğan as an ambitious, forceful, devout and effective politician and appreciates his government's actions like the abolishment of state security courts, reforming the penal code, expanding the right to legal counsel and giving freedoms for teaching and broadcasting in Kurdish, while at the same time criticizing him for his shortcoming in the areas of freedom of the press and the right to protest. Nonetheless, Clinton approved Turkey's Zero Problems with Neighbors policy as constructive in many cases and said: "Turkey proved to be an important and at times frustrating partner. Sometimes we agreed [working closely together on Afghanistan, counterterrorism, Syria and other issues], and other times we did not [Iran's nuclear program]."

Clinton stated that Turkey's powerful Foreign Minister Ahmet Davutoğlu was an exuberant academic turned diplomat and politician who has brought passion and erudition to his position and also someone with whom she could develop a productive and friendly working relationship that though strained numerous times, never ruptured. Although some gossips in the past suggested that the Gülen Movement, which is in an open battle with the Erdoğan-led Turkish government since the Dec. 17 operation, donated a huge sum of money during her campaign in the 2008 primary elections, there is no implication that Clinton is bothered by the recent clashes between the two parties. In fact, although Mrs. Secretary made a negative assumption by saying that Turkey's future direction was uncertain, she said that what was certain was that Turkey would continue to play a significant role in both the Middle East and Europe. "And our relationship will remain of vital importance to the United States," she concluded.
RELATED TOPICS