Turkey ups pressure on ISIL to secure release of hostages 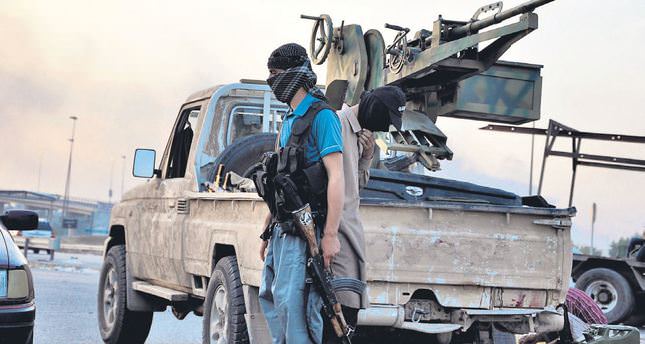 The Turkish government has been pressuring ISIL to release 80 kidnapped Turkish citizens. Negotiations were ongoing when Daily Sabah went to press

The kidnapping of 49 Turkish Consulate staff, along with 31 truck drivers in the Iraqi city of Mosul by militants from the Islamic State of Iraq and Levant (ISIL), prompted the Turkish government to take immediate action without risking the lives of the kidnapped citizens.

According to government sources, the government has closely watched developments since the abductions and has started negotiations with the region's powerful tribes and is pressuring ISIL to release the hostages. As their efforts seemed to prove successful, conflicting views came from ISIL militants regarding the release and while some ISIL militants agreed to release the hostages, others disagreed. On the other hand, there were disagreements about the time and location for the release of hostages as some argued the hostages should be handed over at the northern Iraq or Syrian borders.

This delayed the negotiations as the Turkish government saw the release of hostages over the Syrian border as propaganda. Tensions arose when ISIL stated that they have arrested the hostages rather than releasing them, which resulted in intense connections with tribes and the Kurds in the region.

On the other hand, a group of ISIL militants insisted the hostages should be released on ransom while others argued the hostages should be released in exchange for the release of three ISIL militants in Turkish prisons. A meeting was held at the office of the prime minister in response to the mixed requests of ISIL, coming to the conclusion that a more rigid attitude should be adopted against ISIL. Accordingly, an ultimatum was given to ISIL to release the hostages within 24 hours, and there were hopes that the hostages would shortly be released, emphasizing the life security of the hostages, while noting that a military intervention was in the government's agenda in the case ISIL fails to release them. As the process continued, the government tried releasing a minimum amount of information to the public to ensure that the lives and security of the hostages were not put at a risk, thus disabling ISIL from making unexpected moves due to any public remarks.

The Turkish Consulate in Mosul was supposed to be evacuated, and as evacuation plans were being discussed, ISIL forces have noted they would not touch the Turkish representative office. Some ISIL militants have claimed that they have not taken the people as hostages but took them under the scope of the situation in Mosul.

Yesterday Interior Minister Efkan Ala in a press statement has expressed that the government is trying its best and utilizing all means to safely bring the consulate staff home, while stating that the hostages did not have any health issues. Ala ended his speech by saying that Turkey will hopefully resolve the matter in a befitting manner. Turkish President Abdullah Gül expressed his pleasure with the unification of the political parties and social groups on this issue.
Last Update: Jun 13, 2014 1:53 pm
RELATED TOPICS