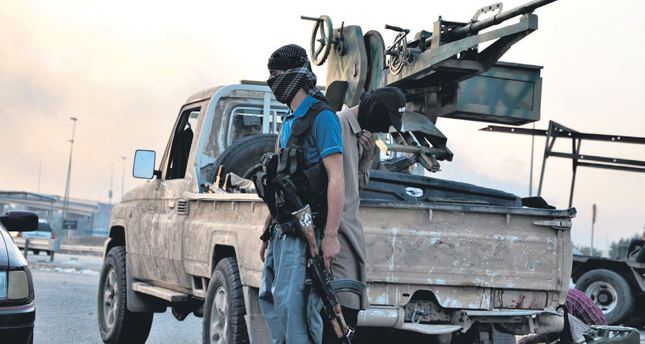 by Daily Sabah Jun 14, 2014 12:00 am
While the Islamic State of Iraq and the Levant continues to claim the abducted Turkish citizens are its "guests," the government has mobilized all its resources to secure the release of the 80 Turkish nationals abducted after the group took over Mosul.

The failure of militants of the Islamic State of Iraq and the Levant (ISIL) to release the abducted Turkish citizens of the Turkish Consulate in Mosul is seen by many to be an attempt to distract attention and stall the process for three main reasons, as it is claimed that ISIL is delaying the release on purpose. Despite the government's formal and informal diplomatic connections with the Iraqi government and tribes, ISIL insists that the abducted Turkish people are not hostages and are "guests," while noting that they will release them once they are sure that they can safely return. On the other hand, ISIL did not respond to requests from the Turkish government to provide a safe environment for the release of Turkish citizens to the dismay of many.

Likewise, it is claimed that ISIL is trying to delay the release of hostages to become popular with the Sunni population in Iraq, and by claiming that they are "guests" rather than hostages, they try to win the sympathy of the people, especially tribes that are in favor of Turkish people. On the other hand, they keep the hostages as a trump in case the Kurdish administration and the central government in Iraq attack Mosul, but it seems this will not last long, as ISIL keeps expanding. In addition to these, it is also claimed that ISIL is using the hostages as a means to be accepted as a political respondent, since they claim to be a state and have indicated that they have handed the hostages over to the governor appointed by them.

Deputy Prime Minister Bülent Arınç has made statements about the current situation and said it is about time that they hear good news about hostages being released and added that the fragility could continue because the correspondents are not a state or a government but rather a militant organization that requires utmost sensitivity in the handling of the issue, as the lives of Turkish citizens could be threatened. "I know that our government utilizes all means possible to resolve the issue," Arınç stated.

On the other hand, he answered questions about Turkey's alleged involvement in supporting organizations affiliated with ISIL in Syria and refused any ties with the organization. "Our records show that those going to Syria or Iraq to fight from Turkey have not been given any assistance or permission," said Arınç, who remarked that ISIL currently does not directly target Turkey even though they have captured Turkish citizens on Turkish property in Mosul. Arınç also explained that Turkey's current stance should not be interpreted as a lack of courage since it is evaluating every possibility when taking action to ensure that maximum security is provided for the hostages to ensure they return home safely.

Meanwhile, the families of truck drivers who were abducted on Tuesday by ISIL militants in the Iraqi city of Mosul have started a sit-in protest in the Silopi district of Şırnak province, in front of the company that the abducted drivers work for. The incident occurred on Thursday when families blocked the entrance and exit of vehicles at company headquarters to protest the abduction of their loved ones in Mosul earlier this week and did not have a solid answer as to where they were currently located.

Vehip İsmailoğlu, who made statements on behalf of the families, has indicated their sit-in protest will continue until the drivers are released while saying they were not released because the company did not pay ransom for them, while asking for assistance from government authorities.

It was announced that the drivers were released on Thursday, but no definite statements have been made about exactly how many drivers had been abducted, as the number varies from 28 to 32. Moreover, while some sources claim the drivers have been released, others claim they were abducted by another group after their release, adding to the uncertainty and grief of their families. On the other hand, İsmailoğlu has also refuted statements claiming that the drivers have been released and indicated the abductors requested a ransom of $5 million, but the company was not willing to pay it.

The city of Mosul fell to ISIL militants on Tuesday, as 300,000 residents fled the city, and the Iraqi government has requested the Iraqi Parliament to declare a national state of emergency.

The government has indicated that it is trying its best and utilizing all means to safely bring the consulate staff home, while stating that the hostages do not have any health issues and are in a safe place.
RELATED TOPICS