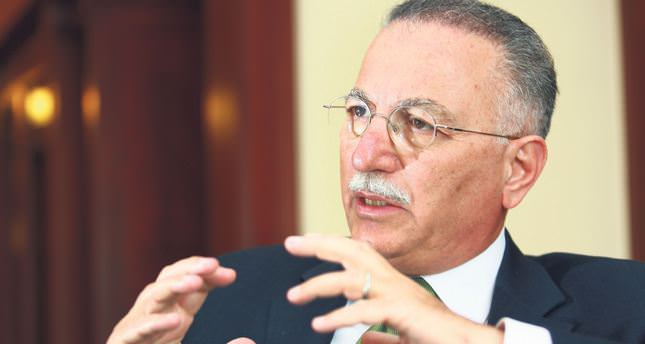 Turkey's main opposition Republican People's Party (CHP) and Nationalist Movement Party's (MHP) long-continued search for a joint candidate to run for president has finally come to an end. CHP leader Kemal Kılıçdaroglu and MHP leader Devlet Bahçeli announced yesterday afternoon that they decided to nominate former Secretary General of the Organization of Islamic Cooperation (OIC) Ekmeleddin Ihsanoglu as their candidate for the upcoming presidential election on Aug. 10. The announcement came after Kılıçdaroglu and Bahçeli held talks to discuss who should be nominated as an inclusive presidential candidate acceptable to the grassroots of both parties. With nearly two months to go before the upcoming presidential election, opposition parties met with other parties in the Turkish Parliament, nongovernmental organizations, Alevi communities, artists and civil society to reach an agreement on an inclusive candidate.

It is asserted that the MHP first offered İhsanoğlu as a candidate for the presidency to the CHP after 10 days of contact, and later the two opposition parties compromised on the name to run for presidency, but announcing İhsanoğlu as a presidential candidate came as a surprise to the CHP. Kılıçdaroğlu allegedly offered CHP Eskişehir Mayor Yılmaz Büyükerşen as a presidential candidate to the MHP, but the MHP did not accept the suggestion.

In a press meeting held after the opposition parties' meeting at the Turkish Grand National Assembly (TBMM), Kılıçdaroğlu yesterday said that the CHP consulted certain political parties, including MHP leader Bahçeli, artists, and nongovernmental organizations for a while to nominate a candidate. "I suggested a name [İhsanoğlu] to MHP leader Bahçeli as an inclusive, compromising, respectful and honest candidate. I should say that we [Turkey] have witnessed a new phase in democracy. We [MHP and CHP] have ensured a great compromise and hoped to ensure a peaceful beginning away from the conflict. We are determined to ensure peace and democracy and have displayed our will on this issue [presidential election]."

MHP leader said that the CHP and the MHP gathered for a second time to agree on a joint candidate and mutually worked to find a suitable name nearly for more than one month.

He said Kılıçdaroğlu suggested a favorable candidate [İhsanoğlu] who is a diplomat and bureaucrat and that Kılıçdaroğlu's suggestion made an impression that the search for a joint candidate is an elaborated and apolitical process. "The MHP will aim to finalize this [presidential election] issue by upholding democracy and unifying on this name [İhsanoğlu] without any political chaos."

Ekmeleddin İhsanoğlu is a Turkish academic, diplomat and former secretarygeneral of the Organization of Islamic Cooperation (OIC). His family went to Egypt as a reaction to Mustafa Kemal Atatürk's attempts to transform and secularize the Turkish society through abolishing traditional Islamic institutions and establishing an oppressive regime on Islam. Born in Egypt in 1943, İhsanoğlu has worked on science history, Turkish culture, Islamic world and Western relations, Turk-Arab relations. He studied science at the Ain Shams University, where he received his BSc in 1966. He remained in Cairo and obtained his MSc in 1970 from Al-Azhar University. İhsanoğlu received his PhD from the Faculty of Science at the Ankara University in 1974.

Taking the office as secretary-general of the OIC in 2005, İhsanoğlu, elected by voting, is marked as the first Turkish secretarygeneral.
During his duty in OIC, he was harshly criticized by several groups and the government for his silence against the military coup in Egypt held in July 3 and against the war crimes committed by the Assad regime in Syria.

İhsanoğlu's perspective that differs from the Turkish government's caused a rift between senior governmental figures, including Turkish Prime Minister Recep Tayyip Erdoğan and Justice Minister Bekir Bozdağ and İhsanoğlu. Bozdağ, who was then deputy prime minister called for İhsanoğlu's resignation after his statements.

In 2013, İhsanoğlu stated that he has never been too far from ruling parties both in the AK Party and Justice Party (AP) term, which was in the office at the time of the military coup on Sept. 12, 1980, but never been too close, either. He noted, "I have never been interested in politics, I cannot be a politician."

İhsanoğlu yesterday commented after CHP announced him as a possible joint candidate. He said, "Being at the center of a compromise is a courtesy. It is certain that in Turkey, there are numerous figures who deserve this post [presidency]. I appreciate the CHP and MHP's common decision on this issue [joint candidacy]." İhsanoğlu did not clarify whether he will accept the joint candidacy offer in his statement.

Commenting on the joint candidate İhsanoğlu, CHP Bursa Deputy Aykan Erdemir said it was pleasing that the joint candidate will be announced after long-going collective meetings amid parties in the Parliament, including right wing and left wing ones.

Referring to the talks held by the CHP and MHP with different figures in politics and civil society, Erdemir said that this joint candidate agreement is an example of negotiation and compromise culture that started to develop in the country. Describing İhsanoğlu as a person who has diplomacy and bureaucracy culture, Erdemir stated that İhsanoğlu will be a beneficial actor across the country as Turkey is turning into a proactive nation by the day.

When asked the possible reactions of CHP grassroots to the joint candidate, Erdemir pointed out that İhsanoğlu is not a familiar name for the nation that is why he should be promoted by introducing his values, background and studies so far.

The CHP and MHP's announcement of the joint candidate turns attention to the AK Party's possible presidential candidate. Circles close to the AK Party say that Turkish Prime Minister Recep Tayyip Erdoğan is likely to be AK Party's candidate for presidency and if İhsanoğlu accepts the opposition offer, Turkey may witness a tight mayoral race between Erdoğan and İhsanoğlu.
Last Update: Jun 16, 2014 11:26 pm
RELATED TOPICS