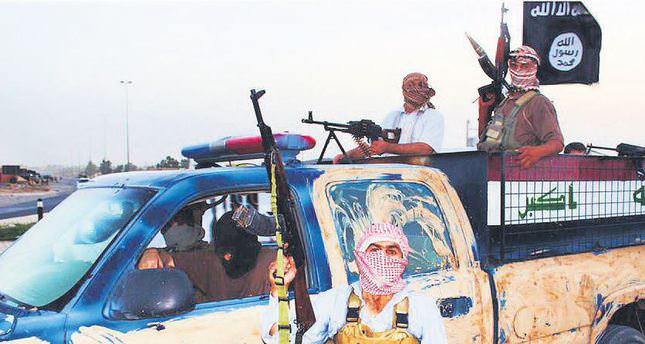 Allies have been told not to launch a military operation until Turkish captives are released by ISIS, says the prime minister

Prime Minister Recep Tayyip Erdoğan yesterday described what was happening in Iraq as something beyond Mosul, and was developing toward a truly sectarian war covering the entire country. Speaking in Trabzon, Erdoğan said he had spoken to U.S. Vice-President Joe Biden over the phone twice in the past three days about Turkish citizens in the Islamic State of Iraq and Syria's (ISIS) hands, and had asked allies and neighboring countries to beware of taking any military steps before the release of the captives. He said officials were doing everything posible to ensure their release. Meanwhile, Deputy Foreign Minister Naci Koru said captives should not be seen as hostages because Turkey was not negotiating for their release.

Since news broke on Wednesday that ISIS militants raided Turkey's consulate in Mosul and kidnapped diplomats stationed there, top officials in Ankara have been holding regular meetings to determine how best to tackle the threat posed by the terrorist group. "We have in contact with related countries, including Iran, to rescue abducted Turkish citizens in Iraq," said Turkish Prime Minister Recep Tayyip Erdoğan over the weekend.

In regard to the ISIS abduction in Tal Afar, a Turkmen-majority city in Iraq, Erdoğan said the Tal Afar issue is sensitive because of the Turkmen who live there and it cannot be disregarded.

Erdoğan said that he has been in contact with U.S. Vice President Joe Biden regarding the abduction issue. According to Sabah newspaper, Erdoğan told Biden during a phone call that neither the U.S. nor the Iraqi government should pursue an operation that will risk Turkish citizens' lives. It is reported that Biden contacted Erdoğan to obtain information on Turkey's plans to deal with the hostage situation. Biden asked whether Turkey will take steps to carry out an operation in the region to rescue the citizens and Erdoğan replied that Turkey will not consider any move that will risk the citizens' lives and asked Turkey's allies to place priority on the lives of hostages. Biden and Erdoğan exchanged ideas on courses of action to ensure regional stability and the safety of the Turkish consul in Mosul, as well as the abducted Turkish citizens.

During the phone call, Erdoğan stressed that officials are regularly being updated on the situation by various sources. Sources of the prime ministry confirmed that Turkey has not asked for help from any other countries so far and the prime minister has not contacted other countries' leaders regarding the issue.

Meanwhile, Turkish Foreign Minister Ahmet Davutoğlu spoke on the issue over the weekend after a meeting in Ankara about the Mosul crisis. He said that a crisis desk will work 24 hours for the issue. "We studied where the [ISIS] crisis can reach. We will continuously watch the developments [in Iraq]. We have been establishing a crisis desk in cooperation with other ministries. This crisis desk will both answer the questions and monitor the situation regarding the issue." Davutoğlu stated that all information regarding the abducted Turkish citizens will be gathered at the crisis desk and the government asked for all companies whose truck drivers were abducted to remain in contact with the government. Davutoğlu noted that Turkey experienced a similar crisis before and was able to overcome it and expressed his hope that the same success will be achieved over the ISIS abduction.

The foreign minister added that Turkey will continue its cooperation with Iraq without any interruption. "I wish peace for all Iraqi people. It is introduced as if there was chaos in Iraq. There are numerous Turkish workers and projects in Iraq. We [Turkey] considered all the security risks. We determined which countries the crisis can reach."

The Turkish consulate in the northern Iraqi city of Mosul was stormed last week by ISIS militants, who took hostage dozens of people including Consul General Öztürk Yılmaz, three children and 16 diplomats.

The attack came as Iraqi Prime Minister Nouri al-Maliki declared a state of emergency after ISIS overran Iraq's second-largest city, overpowering Iraqi central government forces on Tuesday and causing tens of thousands of civilians to flee. The militants are continuing the offensive, reportedly taking control of other cities, including Tikrit, 140 kilometers from Baghdad, and moving toward Tal Afar.

The Turkish Consulate in Mosul has been subject to five serious attacks over the past two years. Most recently, a bombing targeting a Turkish motorcade was carried out by the militant group on May 24.

Deputy Foreign Minister Naci Koru said yesterday during a press conference on the latest developments in Iraq that ISIS attacks in Tal Afar were repulsed.

Regarding the Turkish citizens and Turkish consulate personnel in Mosul in Iraq, Koru said that they have no medical issues and added that Turkish consulate members are not kidnapped, but have been captured. Koru said hundreds of thousands people fled to northern Iraq from Mosul and that a humanitarian aid activity that started on June 11, has been continuing through Turkey's Prime Ministry of Disaster and Emergency Management (AFAD).

Regarding the situation of Turkish citizens in Baghdad, Koru said that Turkey urged its citizens to leave because ISIS poses a threat to Baghdad, but stressed that ISIS has not captured Baghdad and the city is under the control of the Iraqi government. Koru added that there is no military operation on the agenda. The Turkish Foreign Ministry yesterday released a statement that Turkey's efforts to rescue abducted Turkish citizens has been continuing with sensitivity. Reiterating that attacks are continuing in Iraq, the foreign ministry stated that the crisis in Iraq has turned into a sectarian conflict.