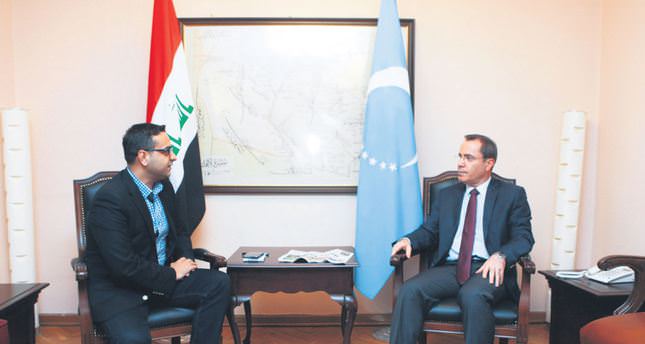 Sunni people of Iraq are fed up with the Shiite-led Baghdad administration's sectarian policies and see ISIS as a savior, according to Hicran Kazancı, the Iraqi Turkmen Front's Turkey representative

Struggling with internal strife and ethnic conflicts for many years, Iraq has again become a center of attention after last week's events. The occupation of cities in Iraq by a terrorist organization, the Islamic State of Iraq and the Levant (ISIS), without substantial resistance has resulted in questions regarding Iraq's future. We interviewed Dr. Hicran Kazancı, the Iraqi Turkmen Front representative in Turkey, representing more than 2 million Iraqi Turkmen.

How do you evaluate what is happening in Iraq? How did ISIS emerge as a threat?

What is happening now in Iraq is not a surprise for anyone acquainted with its politics. ISIS is a terrorist organization that has been operating in Iraq since 2005. For many years, it was one of the armed Sunni groups and was not very active. Then, they became stronger due to the war in Syria.

ISIS' organization in Mosul has existed for many years, and they are becoming stronger by the day. Even the people of Mosul were talking about the possibility of an occupation by ISIS in the summer of 2013.

These developments should not be seen only as a terror event. Due to the mistakes of the Baghdad administration, the people of this region felt estranged. As a matter of fact, in retrospect, many mistakes made during the U.S. occupation of Iraq had a negative impact on the present. For example, the abolishment of Iraqi military forces in 2003 is one of them. The Iraqi army consisted of almost 400,000 soldiers and experienced commanders, which is critical for preserving stability. After the abolishment, the new army created by the U.S. was sectarian and based on ethnicity; militias joined this army. Therefore, mistakes made over many years caused ISIS to become a prominent threat to Iraq.

How does ISIS capture cities without facing any opposition?

The political mistakes of the Baghdad administration are the basis of what is happening today. Protests regarding the demands of locals who live in cities such as Mosul, Anbar, and Fallujah were violently suppressed, causing social unrest. Due to the attitude of the central administration, the people and local governments started to cooperate with ISIS.

There were approximately 60,000 Iraqi army troops in Mosul; however, they fled without putting up much resistance. This is because the Iraqi army is a military force that moves according to political groups, rather than a united and patriotic army.

As the Iraqi Turkmen Front, we have opposed an army based on ethnicity and demand a professional army that regarded the identities of the people of the aforementioned region. However, the Baghdad administration's reception was negative.
This is the reason why ISIS was able to occupy cities without any opposition.

How did ISIS become so successful today?

ISIS' strategies in Iraq and Syria are different.

Does ISIS have public support?

It has been successful in getting the support of people who are fed up with the Baghdad administration's ethnic policies. The Iraqi people have lived under strict embargos and Saddam's oppression.

Thus, the U.S. was able to capture all of Iraq without significant opposition in 2003 because people hated Saddam's rule. Now, because the people are fed up with Maliki's sectarian and unjust administration, they see ISIS as a savior and do not resist it. In addition, ISIS cooperates with local tribes and people in the occupied cities of Iraq. The governor appointed by ISIS in Mosul was a general under Saddam's rule.

Again, the governor appointed by ISIS in Saladin was one of the governors under Saddam. For these reasons, public support for ISIS is growing.

In your opinion, how should ISIS be dealt with?

To deal with ISIS, an international coalition of armies led by the U.S. as in 1991 and 2003 would be a mistake; today, it would have negative results. However, the truth is that the Iraqi Army is insufficient by itself to fight against ISIS. Thus, a peacekeeping force created by countries in the region and coordinated by the U.N. would be beneficial for fighting ISIS. This peacekeeping force could also contribute to stability by establishing a government that is not based on either ethnicity or sects.

However, it seems that international forces are late to the fight against ISIS. More importantly, if the Baghdad administration doesn't receive international aid, it may fall under the control of ISIS.

How does the betterment of Turkey-KRG (Kurdistan Regional Government) relations affect you as an Iraqi Turkmen?

The status of Kirkuk is an issue that should be discussed separately. I feel some discomfort due to the peshmerga presence in the city center. As is the case everywhere in Iraq, we are against the establishment of an ethnic or sectarian security force in Kirkuk. We do not support the peshmerga as the sole provider of security in Kirkuk.

We can negotiate the distribution of rights and authority in Kirkuk with the Kurds after the dissolution of the ISIS threat, but our priority is the elimination of ISIS.

How do you see the future of Iraq?

The constitution of Iraq is the source of many problems. The constitution has many ambiguous items regarding issues, such as disputed territories, Kirkuk's status and the distribution of oil income. This is one of the essential reasons for the problems today.

The Republic of Iraq is a federal state; however, the Maliki administration tends to strengthen the central government. As a result, current developments indicate that Iraqis have no desire to live together any more.

The Federalism Law issued by the Iraqi Parliament, which makes it possible to establish federal regions and regulate them, hasn't come into effect. To keep the Republic of Iraq intact, the most appropriate solution is loose federalism.

Iraq was administered in three separate provinces - Baghdad, Basra and Mosul - by the Ottoman Empire; people lived in peace for centuries without any problems. The administration of the Ottoman Empire, which was not based on ethnicity or sects, is similar to what we call the federal structure today.

For this reason, to facilitate harmony in Iraq, this type of understanding should be dominant.
RELATED TOPICS