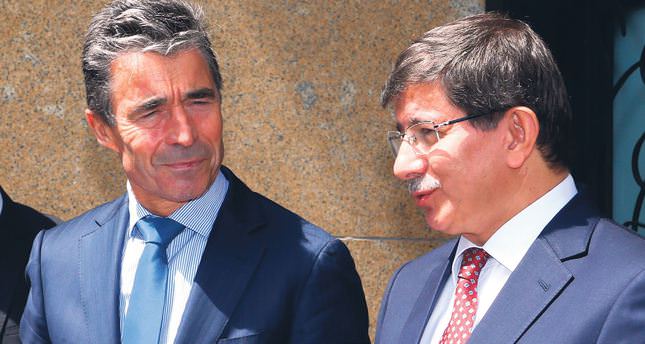 Foreign Minister Davutoglu, at a meeting with the visiting NATO Secretary-General Anders Fogh Rasmussen, said the alliance should amend its policies toward the region in line with developments.

Minister of Foreign Affairs Ahmet Davutoğlu attended a working brunch with Secretary General of NATO Anders Fogh Rasmussen yesterday where Davutoğlu said current developments in the region require NATO to shape its policies around a new and more effective strategic framework. Rasmussen made clear they are watching the dangerous developments in Iraq with great concern while condemning the unacceptable attacks that targeted Turkey's consulate in Mosul and calling for the immediate release of diplomats and staff who were abducted by ISIS militants last week.

Thanking Rasmussen for his cooperation during his tenure at NATO, Davutoğlu emphasized that the organization currently has the best response and defense capacity internationally and is facing serious tests due to current challenges in the region. "The current situation in Ukraine, the steps that must be taken by Balkan states to become a member of NATO, as well as the events which took place in Northern Africa and Middle East which surround and in a way are neighbors to many NATO member states following the Arab Spring, all demand NATO to form a new strategy to effectively handle and approach these issues," said Davutoğlu. The foreign minister added that it is crucial for Turkey to bolster its cooperation with NATO as there are numerous challenges facing the region. Davutoğlu also said that Ankara believes concrete steps should be taken toward a common understanding among NATO members in the short term, while expressing their belief that NATO is an effective transatlantic cooperation organization which supports democratic values. "Considering the current situation in Iraq following the withdrawal, it is evident that political stability and structure are as important as military security" said Davutoğlu, who said Turkey possesses the necessary will to increase consultation within NATO about the region and adopt a common stance.

Rasmussen in his press statement also touched on the significance of cooperation while highlighting the fact that Turkey has been one of the core elements of the NATO for 60 years and expressed they are currently consulting with Davutoğlu about the summit which will take place in Galler in September. Explaining that the current situation and developments in the region has shown that the issue of security should always be a priority, Rasmussen said he is currently discussing the steps that will be taken in this respect with Davutoğlu. Referring to the kidnapping of 49 Turkish citizens at the Turkish Consulate in Mosul by ISIS militants, Rasmussen stated it is a criminal act which cannot be justified by any means, while he called for the immediate release of hostages. On the other hand, Rasmussen noted that Turkey has continued to demonstrate its loyalty to NATO. "Turkey supports the mission to build a better future for Afghanistan and we appreciate Turkey's role in the ISAF mission," said the NATO chief, who added that Turkey will continue to play a leading role in training Afghan security forces under the scope of the new mission. "The presidential election in the country is a solid example of this."

Rasmussen also outlined NATO's mission as guaranteeing the security of citizens and giving the proper response to challenges, regardless of where they may come from and stated that NATO needs necessary resources and true partners in this regard while expressing his certainty about Turkey's strong support for NATO.
RELATED TOPICS