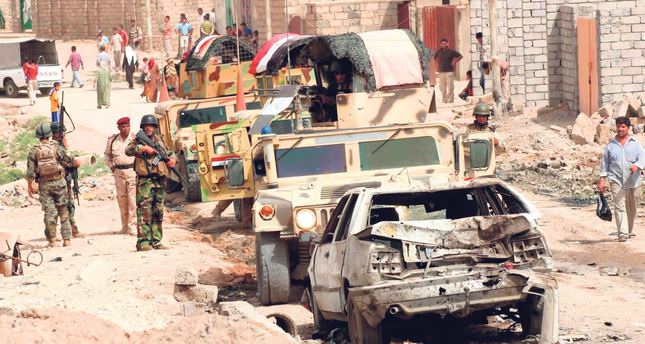 by Daily Sabah Jun 17, 2014 12:00 am
Turkmen living in Tal Afar, between Mosul and Baghdad, are at the center of clashes between the Islamic State in Iraq and Syria and the Iraqi military. Turkmen are fleeing the region in droves, said Foreign Minister Ahmet Davutoğlu yesterday. Meanwhile, Turkmen in the northern city of Kirkuk have been arming to defend their homes.

Turkey's Minister of Foreign Affairs Ahmed Davutoğlu in an official statement said that the violent situation in Iraq possesses a risk of turning into sectarian conflict and called on Turkish citizens to leave the country while the Turkmens flee Tal Afar as attacks there continue.
The statement noted that clashes between the Islamic State of Iraq and the Levant (ISIS) and Iraq's Armed Forces are ongoing and affecting a significant portion of the country, including the district of Tal Afar, where a significant number of Turkmen reside. The town was attacked and seized by ISIS militants on Sunday night. Davutoğlu warned Turkish citizens in Mosul, Kirkuk, Salahaddin, Diyala, Anbar and Baghdad to take precautions and suggested that citizens leave these regions as soon as possible and avoid visiting these places. It was reported that Turkish Airlines is continuing its flights to Baghdad, Basrah, Najaf, Sulaymaniyah and Irbil. "Citizens who would like to leave Iraq can contact the crisis management center in the Turkish Consulates in Baghdad, Basra and Irbil for guidance and they can keep in touch with Turkish airlines to receive information about flights," the statement read, adding that efforts have continued to bring home the staff at the Consulate General of Mosul as well as 31 Turkish truck drivers who have been kidnapped.

The Turkmen people in Tel Afar are fleeing to Kurdish regions as the situation becomes more chaotic, while ISIS is seizing control over regions bordering the Kurdish Autonomous Region. According to Davutoğlu, on Sunday night ISIS seized Tal Afar, a district known to be home to a significant number of Turkmen. Hicran Kazancı, a representative of the Iraqi-Turkmen Front, stated that Tal Afar was taken over by ISIS and a significant wave of immigration has begun there, leaving no Turkmen in the town as they have fled to the Kurdish region. Meanwhile the Ministry of Foreign Affairs has minimized the number of diplomatic staff at its missions in Iraq while the Consul Generals in Basra and Irbil have remained open.
RELATED TOPICS