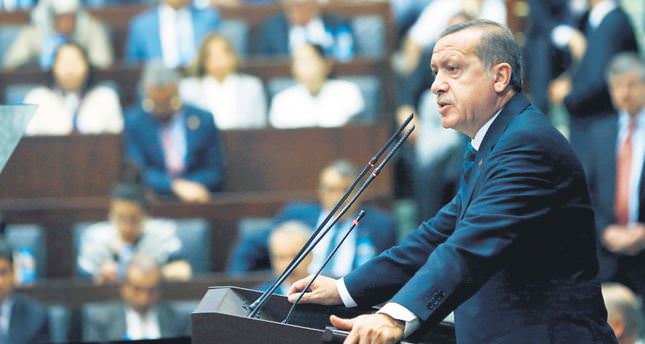 Prime Minister Recep Tayyip Erdoğan at his party's group meeting yesterday panned the government of Iraq for failing to provide security for the staff at the Turkish Consulate as well as the 31 Turkish truck drivers who were abducted by militants from the Islamic State of Iraq and al-Sham (ISIS).

Erdoğan said the government is making efforts to bring the consulate staff and truck drivers back home. The government is working through a crisis management center formed at the Ministry of Foreign Affairs with authorities constantly in contact with Iraqi officials to evacuate and make the necessary warnings to Turkish citizens in Iraq. "Embassies and consulates, with all their staff, are guaranteed under the countries in which they are located," said the prime minister. "Each government is obliged to protect and provide security for diplomatic personnel on their land and are responsible for securing their property and life. The central government in Iraq has greatly failed to provide this."

The prime minister touched upon the opposition parties' efforts to turn the issue of Mosul into a domestic political issue and claimed they were exploiting the situation in an opportunistic manner. "The making of such a sensitive issue into a domestic political matter is a clear example of irresponsibility" said Erdoğan, who remarked the government is trying to rescue the hostages while the Republican People's Party (CHP) is only using the situation for political gains. He also criticized the CHP's leader Kemal Kılıçdaroğlu for calling the Middle East "a swamp," saying such remarks were racist, discriminatory and reveal subconscious fascism. "Such approaches are extremely dangerous" said Erdoğan, who expressed these remarks put the lives of abducted citizens directly at risk.

The minister of Foreign Affairs has added the city of Basra to its security warning list due to the ongoing conflict. Under this scope the ministry has advised citizens in cities including Mosul, Kirkuk, Salahaddin, Diyala, Anbar, Baghdad and Basra to take security measures and vacate these areas as soon as possible and suggested that citizens avoid visiting these cities. The ministry has also called the Iraqi government to maximize security precautions at Turkey's embassies in Baghdad and Basra. The deputy prime minister and the state's spokesperson have recently expressed that the government's priority is to safely bring the abducted citizens home while also stating the Iraqi government failed to protect the consulate.

He called all media outlets to avoid making speculative news on the issue as it may pose a direct threat to the lives of the hostages.
The Turkmen population in Tal Afar is fleeing from the region as ISIS militants have captured it according to the Ministry of Foreign Affairs while Hicran Kazancı, the Representative of the Iraqi Turkmen Front has stated the Iraqi central government's planes were bombing Tal Afar, starting a mass wave of emigration from the district. With the Kurdish region only accepting Sunni Turkmen, there is no place of refuge for Shiite Turkmen, according to claims.

Meanwhile, the Shiite Turkmen population located in Tazehurmatu, a district located 10 kilometers to the south of Kirkuk has taken up arms against ISIS militants. It has been reported that over 500 Turkmen youth have armed themselves in defense.

Bülent Arınç refuted claims that Turkey is supplying arms to Turkmen in Iraq and said they are intelligent people who would not see it reasonable to request arms from Turkey in line with realpolitik. Arınç said Turkey is sending humanitarian aid to the region and called Turkmen people to leave aside sectarian differences and act as one against ISIS militants.

Currently, the number of Turkish diplomats working in Iraq has been reduced to a minimum while the Ministry of Foreign Affairs expressed the consulates in Baghdad and Basrah will remain open until a request is made by the government to withdraw them. Turkey evacuated its consulate in the southern Iraqi city of Basra on Tuesday due to an increases security risk, transferring its staff to Kuwait, Foreign Minister Ahmet Davutoğlu wrote on his Twitter account.
RELATED TOPICS