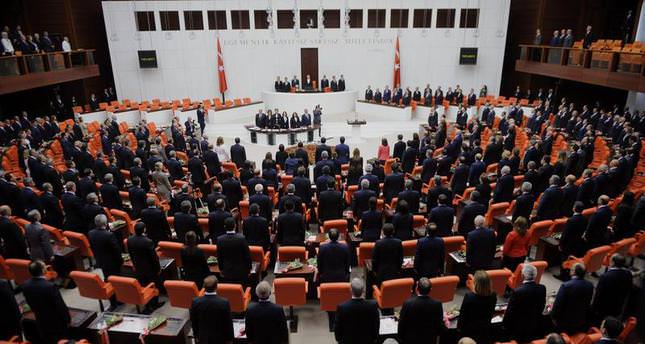 by Daily Sabah Jun 19, 2014 12:00 am
The General Assembly of the Turkish Grand National Assembly (TBMM) on Tuesday enacted comprehensive legislation called the "New Law Package" that contains a series of reforms in the judiciary. These include stricter penalties for numerous crimes including qualified theft and the production and distribution of narcotics with special emphasis on harsher penalties for the sexual abuse of children.

The law was proposed to address a number of deficiencies in the current system pertaining to the duties of district administrative courts and to impose stricter penalties aimed at detering future offenses.

The new law also determines which rulings can be appealed, the appeals process and the period in which these rulings can be made. It also outlined that the Supreme Court of Appeal had a total of 38 departments and that the Grand General Assembly of the Supreme Court of Appeal would determine the division of labor. The number of members in the First Presidency Council of the Supreme Court of Appeal will be increased from 8 to 12 while the number of substitute members will be increased from 4 to 8 in efforts to ensure a more participatory and pluralist environment.
The Criminal Courts of Peace will also be abolished and their duties will be transferred to the Criminal Court of First Instance. Stricter penalties will also be imposed on those attempting to influence experts, witnesses or those who work for the judiciary.

One of the most important features of the law package is the imposition of stricter penalties for sexual assault. Upon the complaint of the victim, the accused will face 5 to 10 years in prison, a minimum of 12 years for rape and two to five years for verbal assault, respectively. In the case that the sexual assault is committed against someone unable to physically defend themselves or is mentally disabled sentences will be increased by half. Sexual abuse of children will also receive harsher penalties with at least 16 years in prison for rape. Currently, underage marriage includes children who are married under the age of 15 and it is legally prohibited and regarded as sexual abuse even if a legal complaint is not filed by the girl or others. The amendments will include girls up to the age of 17, particularly those forced by their families to marry their rapists.

Penalties for qualified theft have also been increased from three to five years and from 7 to 10 years. In cases where the theft negatively affects public services in the communications, energy, railway or airway transportation sectors, the penalties will double.

The bill created in response to last month's Soma coal mine disaster and the workers who died was transferred from the omnibus bill to this law package to ensure faster payment for families of the victims.
RELATED TOPICS