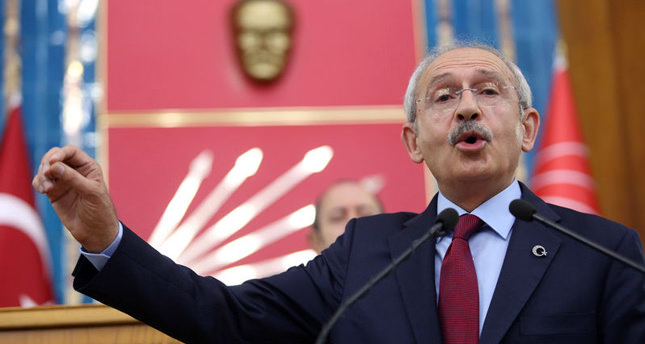 The main opposition secularist Republican People's Party (CHP) and the Nationalist Movement Party's (MHP) announcement of former Organization of Islamic Cooperation (OIC) Secretary-General Ekmeleddin İhsanoğlu has added fuel to the conflict within the CHP that started after the party's failure in the March 30 local elections.

Although certain CHP members are about to release a declaration to prevent İhsanoğlu's joint candidacy, the CHP and MHP will organize a presidential campaign program for İhsanoğlu to promote him because he is a relatively unknown figure across the country. İhsanoğlu, who has not officially announced that he accepted the candidacy offer, is scheduled to pay a visit to MHP leader Devlet Bahçeli and CHP leader Kemal Kılıçdaroğlu in the upcoming days.

When asked about the reactions of certain CHP members against his candidacy, İhsanoğlu said, "I respect those criticisms. Some people may not gain enough insight about me, but we [CHP, MHP and İhsanoğlu] have entered into a study, and we will meet with you [Turkish citizens] more. I have had lots of contacts both with the national and with the international press; I respect informing society and raising awareness amid citizens; that is why I need your [journalists] help to transfer healthy information [to society]."

Regarding İhsanoğlu's presidential campaign program, it is reported that fewer rallies, but more visits are on the agenda for İhsanoğlu. He is expected to visit nongovernmental organizations, political parties and opinion leaders as part of his electoral campaign.

The official announcement of İhsanoğlu's candidacy is expected after MHP and CHP deputies collect signatures before July 3, which is the last day for an official candidacy announcement. Both parties are expected to technically support İhsanoğlu's campaign process, but neither of them will be in the forefront during the process.

The controversy over İhsanoğlu's candidacy is because he has no political background, but an academic and scholastic one. In Turkey, as a country that has witnessed numerous political campaigns, especially ahead of electoral periods, İhsanoğlu's probable performance in political campaigning and promoting himself as a presidential candidate raised eyebrows based on his previous statements that he is not interested in politics and cannot be a politician.

Commenting on the decision to nominate İhsanoğlu, the MHP leader stated that the 71-year-old nominee will eventually learn politics if he gets elected as the next president.

While the CHP is once again being rocked by intra-party conflict since Kılıçdaroğlu announced İhsanoğlu as the nominee for presidential candidacy, CHP Denizli Deputy İlhan Cihaner said for his party, it is still not too late to decide on nominating another candidate and urged party members to come up with an alternative.

The rift within the main opposition also has one circle that supports Kılıçdaroğlu's decision. CHP Secretary-General Gürsel Tekin confessed that he does not know much about İhsanoğlu like majority of the public, but the public will learn about the nominee and be convinced by the time of the August election.

According to many political analysts, İhsanoğlu will struggle a lot during the presidential campaign in which he will speak to crowds around the country. It also noted that the opposition sought to win some conservative votes with the İhsanoğlu decision without realizing that the former OIC head kept quiet over the massacres in Syria and the Egyptian coup.

On the other side of the coin, the CHP has lost its Alevi support for the presidential election. The Alevi Bektashi Federation (ABF) released a
statement on Wednesday in which it said İhsanoğlu, who comes from the conservative segment of the public, couldn't be the presidential nominee of the Alevi community. The statement added that the federation would hold a meeting next Wednesday to announce the Alevis' expectations from a potential candidate.

CHP deputies, who criticized the CHP administration and are opposed to İhsanoğlu's candidacy, and former CHP leader and Antalya Deputy Deniz Baykal, who was purged from the CHP due to a sex tape scandal, also held a meeting in Parliament. Tunceli Deputy Hüseyin Aygün, Adana Deputy Ümit Özgümüş, Eskişehir Deputy Süheyl Batum, Bolu Deputy Tanju Özcan and İstanbul Deputy Fatma Nur Serter are among the deputies who participated in the meeting. It is alleged that the reactions against İhsanoğlu's candidacy may lead to the nomination of another candidate if 20 deputies agree on a candidate and sign for this candidate. It is reported that deputies demanded a roadmap with four steps against İhsanoğlu's candidacy in the meeting. According to the roadmap, CHP deputies may hold a meeting with Kılıçdaroğlu to demand a revision of his İhsanoğlu decision; they may release a harsh declaration against his candidacy or may call for an extraordinary meeting to agree on an alternative candidate. For the last option, deputies can name another candidate by collecting signatures from CHP deputies.