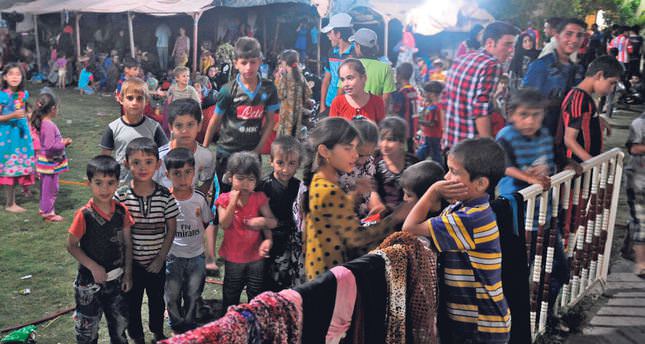 Turkmen are fleeing from Tel Afar while some are working to stop ISIS' advances. Turkish FM Davutoğlu has called for preventing a sectarian war and the release of abducted Turks

Islamic State of Iraq and al-Sham (ISIS) militants allegedly abducted 15 more Turkish citizens in Kirkuk, Iraq yesterday, according to a worker and Iraqi citizen who was released by ISIS. Turgay Hürmüzlü, the worker who has been abducted but released by ISIS, in a recent interview reported that there were 15 Turkish workers among 60 foreign workers who worked on the construction of a private hospital in Tikrit. India also claimed 40 Indian workers in Iraq have been abducted by ISIS. Meanwhile, the Iraqi government asked the U.S. to launch airstrikes against ISIS.

The incident has alarmed both Turkish citizens and the government as the situation in Iraq is becoming more complex every day with ISIS militants attacking civilians and posing a direct threat to the survival of the Iraqi Turkmen who are fleeing to Kurdish-controlled regions.

President Abdullah Gül in a recent press statement has expressed that the situation should be handled very carefully as it is a sensitive matter and a serious concern for many as radical organizations are attempting to take over, creating sectarian conflict and civil war. "Our priority is to protect Turkey from violence and to make sure Turkey does not get affected by the negative developments in the region" said Gül, who noted such incidents create security issues and that the intelligence forces along with police, diplomats and others are working hard to deal with these issues. "To prevent the spread of radical and terrorist organizations is our and the international community's duty," Gül expressed, who underlined the fact that while the government was working hard to bring back the abducted Turkish citizens in Iraq, the situation of the Turkmen in Iraq was dire. He said that the Turkmen are caught in cross-fire and explained the Turkish government will do all that it can for their Turkmen brothers and sisters.

Likewise, Ahmet Davutoğlu, the Minister of Foreign Affairs has stated that the Turkish government has responded to the crisis in Iraq by sending humanitarian aid. "Prime Ministry Disaster and Emergency Management Presidency (AFAD) have sent the necessary staff to Irbil to coordinate humanitarian aid," said Davutoğlu, who stated the organization is trying to distribute the aid to Iraqi Turkmens who have taken refuge in the Kurdistan Regional Government (KRG).

He added that the aid does not only contain tents for sheltering and food for nourishment but also medical supplies. Speaking at the 41st Session of the Oic Council of Foreign Ministers Davutoğlu said that "firstly, all civilians abducted must be released immediately including our citizens, diplomats and their families in our Consulate General in Mosul. This situation constitutes a clear violation of all humanitarian values. I also urge our fellow Muslim nations to join our call to all armed groups and militias to refrain from harming civilians. Secondly, we need a new beginning in Iraq to prevent ethnic and sectarian strife. All people of Iraq regardless of their ethnic, religious and sectarian background should be united. The last election was a good opportunity for this new beginning.

Thirdly, I want to make a call from here to all Muslim scholars, opinion leaders and responsible statesmen to join in making a united call to prevent sectarian strife which could harm not only the historic cities, but also the very essence of Islamic solidarity and identity.

In an interview with the Daily Sabah, KRG Spokesperson Minister Safeen Dizayee made remarkable statements regarding the current situation and expressed the KRG's stance regarding the ongoing conflict. In response to the claims that the KRG did not accept Shiite Turkmen who fled from Tal Afar due to the ISIS threat, Safeen Dizayee stated the KRG accepts displaced people from all ethnicities and sects without exception or discrimination. "After the recent events in Mosul, approximately 300,000 people arrived in the Kurdistan Region, primarily in Duhok and Irbil governorates. Not a single individual was turned away, and there has not been any discrimination," said Dizayee.

Local sources claim Turkmen who tried to flee Kurdish controlled regions were turned away based on the fact that they are Shiite Muslims. On the other hand, Dizayee has stated that the KRG administration would not unilaterally declare independence amid this conflict as the parliament of the Kurdistan region currently works within the parameters of the federal Iraqi state. "Any change in administrative status would need to be achieved through decisions by the Kurdistan Parliament or a referendum by the citizens of the region." Dizayee noted, and expressed that the KRG values the development of relations and cooperation with Turkey and stated they are in touch with Turkey in this respect.

Meanwhile, the Turkmen in Iraq are taking up arms to protect themselves from ISIS violence as the Iraqi security forces have left the scene. Aydın Beyatlı, the Secretary General of the Federation of Türkmeneli Associations in a recent statement has expressed that there have been massacres in the region as 60 Turkmen prisoners were slaughtered by ISIS forces in Tal Afar, while around 150,000 Turkmen are emigrating to Sincar, Dahok and Zaho.

Beyatlı has also touched upon the threats posed by peshmerga forces as the arrival of 30,000 peshmerga forces in Kirkuk poses a serious threat to the city's demographic structure. "They would directly affect the sensitivities between the ethnic groups in Kirkuk," said Beyatlı, who claimed their arrival would create enmity amongst the Kurds, Turkmen and Arabs. On the other hand, he stated that the Turkmen have taken up arms to protect and defend them and to fight terrorism.
Last Update: Jun 19, 2014 1:11 am
RELATED TOPICS