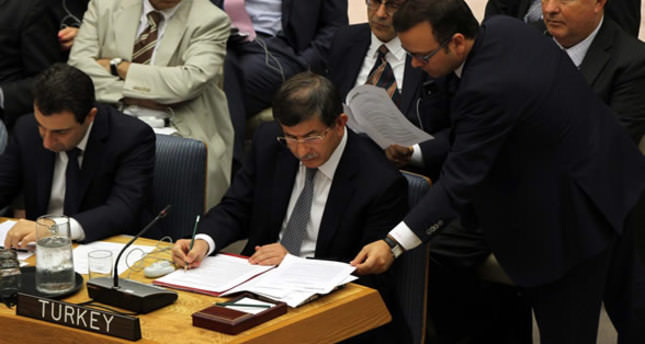 by AA Jun 20, 2014 12:00 am
Turkey and the U.N. Development Program have signed a five-year $15 million agreement on Friday that will pave the way for the U.N. program to re-locate its regional office to Istanbul.

The agreement signed by Turkish Foreign Minister, Ahmet Davutoglu and U.N. Development Program (UNDP) Administrator, Helen Clark in Istanbul will ensure that Turkey contributes a total of 15 million dollars to the program over five years, with a 3 million dollars annual contribution.

"This contribution will be managed by the program's Istanbul office," Davutoglu said during the press conference with Clark. He added that Istanbul is one of the most important hubs in the world, and he is happy that Turkey will both serve and host the U.N., its regional offices and its international conferences.

"Istanbul is the right place to be," Clark commented for the re-location of the regional office in the city, by adding that Istanbul is also UNDP's home from now on. She also said that she is happy for Turkey's contribution to development.

The regional office will move from Slovakian capital Bratislava to Istanbul, but it is yet unknown when the new Istanbul office will open.

The new regional program will cover inclusive and sustainable growth and development, improved democratic governance, the rule of law and accountability as well as supporting work to reduce the likelihood of conflict and work to lower the risk of natural disasters, including those from climate change.

Prior to that agreement, Turkish FM Davutoglu made a speech at the conference co-hosted by the Republic of Turkey Prime Ministry Turkish Cooperation and Coordination Agency (TIKA) and the UNDP.

Turkish minister underlined that Turkey has contributed a total of 3.2 billion dollars for development aid. "This sum is bigger than the Foreign Ministry's budget. Nevertheless, we are proud of this aid."

Also, Davutoglu supported the reform process at the U.N. for creating a just system. "We will host a meeting for that process," he added.