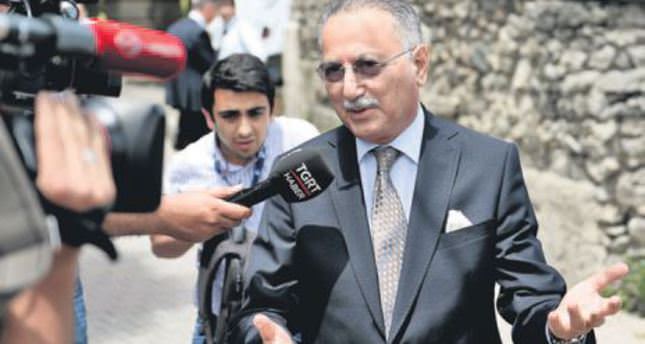 İhsanoğlu will be the secularist CHP's sole presidential candidate, says Kılıçdaroğlu, as opposition within the party mulls alternatives

Ahead of Turkey's first presidential election in which the president will be elected by popular vote, the opposition secularist Republican People's Party (CHP) and Nationalist Movement Party's (MHP) announcement of former Organization of Islamic Cooperation (OIC) head Eklemeddin İhsanoğlu as their candidate faced harsh reactions from secular CHP deputies and the party's grassroots. Standing against the reactions and claims that some would bring forward an alternative candidate, CHP leader Kemal Kılıçdaroğlu stated that he is insistent on his joint candidacy choice, and no matter how certain deputies reacted, he will not change his decision or tolerate dissent.

On a TV program Thursday, Kılıçdaroğlu agreed that he took a risk by announcing İhsanoğlu as a candidate. The CHP leader said he is a party leader, and if a party leader does not take a risk, it indicates a problem and he took the risk for the sake of the country. Being at the center of media focus since his candidacy was announced, İhsanoğlu stated that the MHP and CHP have prepared a presidential election campaign for him.

According to the program, İhsanoğlu is scheduled to participate in news programs and visit nongovernmental organizations and political parties, but won't hold extensive rallies across the country, which is a tradition in Turkey ahead of the electoral process.

While the electoral campaign is underway for İhsanoğlu, certain CHP deputies stood against İhsanoğlu's candidacy and searched for certain alternatives to announce another candidate. It is also reported that the CHP administration tried to convince CHP deputies to sign İhsanoğlu's name to gather 20 deputies' signatures, which is necessary to be nominated as a presidential candidate.

It is reported that deputies demanded a roadmap with four steps working against İhsanoğlu's candidacy in the meeting. According to the roadmap, CHP deputies may hold a meeting with Kılıçdaroğlu to demand a revision of his İhsanoğlu decision. They may release a harsh declaration against his candidacy or may call for an extraordinary meeting to agree on an alternative candidate.

Responding to journalists' questions yesterday, İhsanoğlu replied to Prime Minister Recep Tayyip Erdoğan's statement that the joint candidacy will not work because it has no base, İhsanoğlu, the joint candidate said: "I do not like arguments. Like the prime minister says all the time, 'Everything will become clear at the ballot box.' The nation will vote, this approach is respectable."

Justice and Development Party (AK Party) Vice President Numan Kurtulmuş commented on the MHP and CHP's joint candidate İhsanoğlu. Highlighting that İhsanoğlu is an appropriate figure in person, Kurtulmuş said that the MHP and CHP are stuck in a rut because they know that if they announce a candidate on their own, they have no chance.

Referring to the joint candidate formulation of the opposition parties, Kurtulmuş said they have already accepted failure; that's why, they are in search of an alliance to gain the upper hand against the AK Party by bringing different views and grassroots together.

Kurtulmuş pointed out that what is more important in the presidential electoral process is not the identity or character of the candidate, but the oppositions' inability to be an alternative to the ruling party.

Touching upon the roles of politicians in the process of political normalization in Turkey, Kurtulmuş said: "A presidential candidate that has a political background would be more effective because the president will be elected by a popular vote. The opposition's [MHP and CHP] apolitical candidate search reminds me of searches in Turkey in previous years when a chief of general staff or retired bureaucrat took the post of president."
RELATED TOPICS