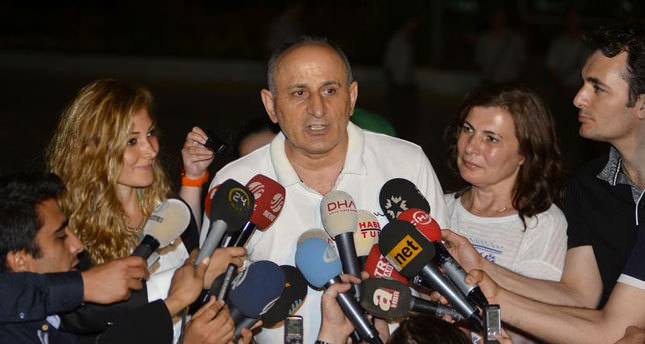 by Daily Sabah Jun 21, 2014 12:00 am
Retired Colonel Dursun Çiçek, who was released in the Sledgehammer military coup plot trial on Friday, has accused the Gülen-linked parallel structure within the judiciary of copying his signature and submitting a "so-called evidence document" to prosecutors investigating the coup plot trial.

"Parallel structure" is a term used to describe members of the Gülen Movement - also referred to as Hizmet - an organization run by the self-exiled cleric Fethullah Gülen, which has been engaged in a campaign to undermine the government.

Speaking to press following his release on Friday, Çiçek described the Gülen movement's infiltration within the judiciary as a gang that acts like "triggerman" of the parallel structure. He accused this structure with duplicating his signature on a document in 2009.

"This gang, which dares to place a bug in the prime minister's office to wiretap him, is behind the plot against me in which they copied my signature. This is what I tried explaining all the time," Çiçek said.

The Constitutional Court unanimously ruled on Wednesday that there were reasons to doubt the evidence and testimonies of witnesses used in the trial where 230 defendants were convicted in September 2012 on charges of plotting a military coup.

The top court said the ruling was based on the breach of the defendants' rights concerning "digital data" collection and wiretapping against them. It also cited that former Chief of General Staff Hilmi Özkök and former Land Force commander Aytaç Yalman were not summoned to the court as witnesses despite requests by the defense.

According to the alleged plan, the military was to systematically foment chaos in society through chilling acts of violence including bombing of mosques in Istanbul and downing of a Turkish warplane over the Aegean.