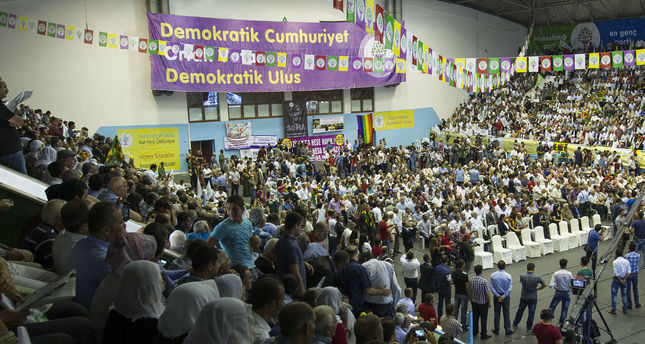 The People's Democratic Party (HDP) convened on Sunday to hold its second extraordinary meeting in Ankara to choose its new co-presidents Selahattin Demirtaş and Figen Yüksekdağ.

Ertuğrul Kürkçü, co-president of the party has made challenging remarks as he claimed his party was more effective than the Republican People's Party (CHP) and the Nationalist Movement Party (MHP) and operated throughout the country whereas the two parties fail to gain support from Southeastern Turkey. Kürkçü stated the HDP was opening a new chapter and claimed they are Turkey's door to the future while touching upon the fact that people have not been killed in the past two years, and there is a sense of harmony and understanding amongst people throughout the country. "All of these positive developments are the work of those who stand up against insults, discrimination and ill-treatment in a conscious manner to give hope and promise a better future" said Kürkçü, who criticized the alleged notion of being a political party of Turkey as he claimed HDP's activities did not revolve around a single dimension and that they were involved in all sorts of issues. He went on to claim that the HDP was more of a political party of Turkey than CHP and MHP because they operated on a wider scale compared to the two parties and they aimed to reach everyone in the country rather than a small minority. Kürkçü also expressed the HDP was the second most active party after the AK Party and this was the reason why they are a candidate to become the ruling party.

The party received a warning for not having a Turkish flag at the convention, a mandatory obligation for formal ceremonies and ended up putting a free standing Turkish flag as a result. The convention also chose members for the caucus, central disciplinary board and conciliation board, while amendments were made to party regulations and programs.