CHP's Kılıçdaroğlu attempts to unify the party on İhsanoğlu's candidacy 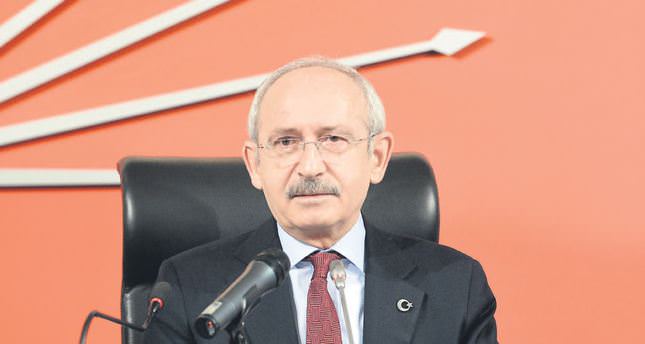 CHP leader Kılıçdaroğlu is trying to persuade party members to accept İhsanoğlu, who, according to ORC's survey, will receive 39.4 percent of the vote against Erdoğan's 54 percent

Turkey's main opposition parties, the secularist Republican People's Party (CHP) and Nationalist Movement Party (MHP) last week announced former secretary general of the Organization of Islamic Cooperation (OIC) Ekmeleddin İhsanoğlu as their joint candidate. He is considered to be a more inclusive and apolitical presidential candidate by the opposition.

Yet İhsanoğlu's candidacy came with numerous criticisms from the CHP's secularist members and stirred up the CHP's intraparty conflict that started after the party's failure in the March 30 local elections. In order to defuse the conflict and come to a compromise with the party deputies who are strictly against a presidential candidate with an Islamic background, CHP leader Kemal Kılıçdaroğlu held a parliamentary caucus yesterday afternoon to convince CHP parliamentary caucus members on the efficacy of İhsanoğlu's candidacy and to postpone the general assembly for one year due to the upcoming presidential election on Aug. 10 and parliamentary elections in 2015. Afterward they will decide on the general assembly whether they will continue with current CHP leader Kılıçdaroğlu.

According to the roadmap, there were possibilities that those deputies may hold a meeting with Kılıçdaroğlu to demand a revision of his İhsanoğlu decision. They may release a harsh declaration against his candidacy or may call for an extraordinary meeting to agree on an alternative candidate.
Yet, Kılıçdaroğlu deflected the criticisms and stated that he will stand by his joint candidacy choice. He said that no matter how certain deputies reacted, he will not change his decision.

Speaking to Al Jazeera, Kılıçdaroğlu stated on Friday that there is no possibility for a second candidate and indicated that discipline mechanisms will be applied for those who do not comply with CHP regulations.

Former CHP leader and Antalya Deputy Deniz Baykal, who was removed from his post over a sex tape scandal, spoke to the Turkish daily Habertürk over the weekend regarding İhsanoğlu's presidential candidacy and the CHP's intraparty conflict. Concerning the CHP's policies toward the joint candidacy, Baykal said that the president cannot be elected with cunningness.

Baykal confirmed the allegations that his name was among possible CHP presidential candidates and if there had been an agreement on his name, he would have accepted the candidacy offer.

Criticizing his own party's recent policies, Baykal stated that İhsanoğlu is not a suitable candidate for president. Describing İhsanoğlu as a gentleman and well-known in international circles, Baykal said that Turkey needs a joint candidate who will absorb Turkish politics, be able to stand against the mistakes of the ruling party and fight for a democracy. He added that it was possible to find a candidate who inspires more confidence in terms of his political background.

Clashing over İhsanoğlu's candidacy with the CHP, Baykal stated that a search for an apolitical candidate is unnecessary - what is needed in the country is a president who will stand against foreign politics based on a sectarian approach, assure the superiority of law and raise his voice against corruption.

On the other side of the coin, Turkish Prime Minister Recep Tayyip Erdoğan made striking remarks after his European visit over the weekend. He said that the Justice and Development (AK) Party will announce its candidate after the opposition officially agrees on İhsanoğlu's candidacy. He added that any option is possible until July 3, the last day to announce presidential candidates. Indicating that the presidential race is up to the balance between the ruling party and the opposition parties, Erdoğan noted that if the opposition candidate changes, the AK Party candidate may also change.