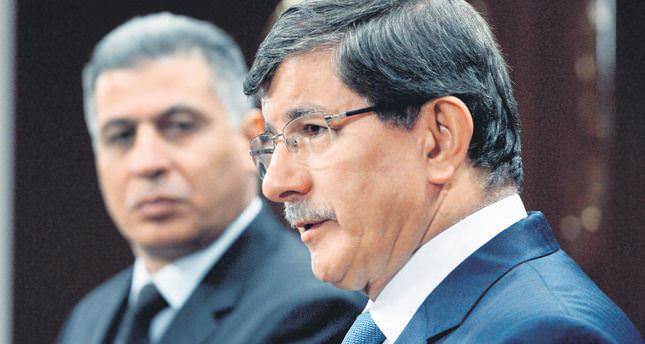 by Daily Sabah Jun 24, 2014 12:00 am
ForeIgn Minister Ahmet Davutoğlu, speaking at a joint press conference with Iraq Turkmen Front leader Ershad Salihi, said attending to the needs of Iraq's Turkmen minority was Turkey's duty, adding that the Turkish Red Crescent, together with other state institutions, would be doing their utmost to help the community.

Meanwhile, reports said yesterday that 15 Turkmens were killed in an ISIS attack on the village of Beshir in the northern Iraqi city of Kirkuk.

According to reports yesterday 15 Turkmen were killed in an attack by the Islamic State of Iraq and al-Sham (ISIS) on the village of Beshir in the northern Iraqi city of Kirkuk.

The 15 people who lost their lives were buried in Kirkuk's Tazehurmatu, a district located 10 kilometers to the south of Kirkuk. During the funeral ceremony, Turkmen gathered to protest ISIS' attack and chanted slogans denouncing terrorism. Armed Turkmen and Kurdish groups took extra security measures during the ceremony.

ISIS militants denied delivering the 15 corpses to their families after the attack, but it was reported that mediators contacted ISIS and convinced the militants to deliver the corpses. The families claimed that some of the corpses were burned beyond recognition.

Clashes in Iraq and Turkmen's current situation were at the top of the agenda during the meeting. Salihi and the members also spoke with
Davutoğlu about the latest developments in Iraq. Measures to offer assistance to Iraqi Turkmen were also discussed in yesterday's meeting.

Since news broke two weeks ago that ISIS militants raided Turkey's consulate in Mosul and kidnapped diplomats stationed there, top officials in Ankara have been holding regular meetings to determine how best to tackle the threat posed by the terrorist group. According to the Turkish Foreign Ministry the abductees are in good condition and expected to be released at any time.
Last Update: Jun 24, 2014 2:24 am
RELATED TOPICS