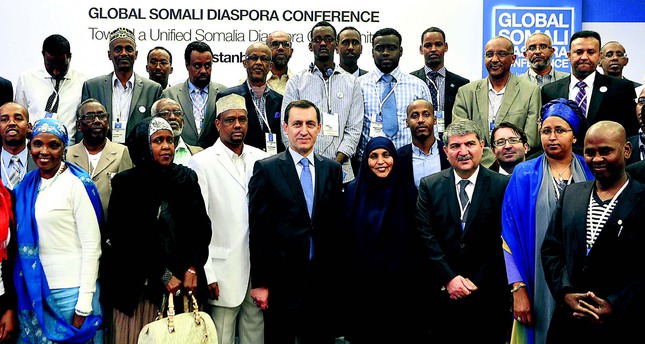 In a meeting with Erdoğan, representatives of the Somali diaspora expressed their appreciation for assistance provided to them by Turkey and delivered a letter to the prime minister to thank him

Ninety-nine representatives of the Somali diaspora visited Prime Minister Erdoğan and thanked him for Turkey taking the lead in helping Somalia and asking for his help to foster cooperation between Turkey and the Somalis living overseas.

On Sunday, Turkish Prime Minister Recep Tayyip Erdoğan met with 99 representatives of the Somali diaspora, who came from 19 countries, including the U.K. and U.S., to discuss ways to maximize the diaspora's contribution to Somalia and cooperation with Turkey. Although the meeting was originally scheduled to be held a few months ago, it was delayed due to Erdoğan's busy agenda. Yet, the diaspora members said they were quite pleased to have been extended an invitation and attend the meeting. At the end of the meeting, they gave a letter to Erdoğan, while expressing their happiness with Turkish investments in the country. Although the meeting was closed to the press, Daily Sabah obtained information about the gathering from a source in the Prime Ministry.

In the meeting the diaspora's structure and methods for consolidating its power in the countries of their residence was discussed. Erdoğan assured the diaspora members that Turkey will continue helping the country by delivering humanitarian aid and constructing infrastructure across the country.

Another topic discussed at the meeting was the need for increased cooperation between the Turkish and Somali diaspora in Europe and the U.S. Turkish officials said they appreciated that Somalis wrote as many as 5,000 letters to a Mississippi state legislator denouncing a bill which would have recognized the alleged Armenian genocide. Turkish institutions and NGOs and the Somalis are expected to develop a closer working relationship as a result and jointly work to address local problems.

At the conference it was announced that the Somali diaspora sends $2 billion (TL 4.28 billion) to Somalia every year. While Kenyan banks are currently used to transfer this money, plans to have Turkey become a transition point for money exchanges were also discussed in light of the fact that Turkish Airlines is the only international airline flying to Mogadishu.

At the end of the meeting the diaspora demanded that the meetings be held regularly, in Turkey. On Sunday the Turkish Foreign Ministry stated that Turkish Ambassador to Somalia Kani Torun was relieved of his duty and Olgan Bekar was appointed to take his place. The ministry said that the change should be seen as normal, as Turkey recently rotated and replaced 30 of its ambassadors.
Last Update: Jun 24, 2014 1:31 am
RELATED TOPICS