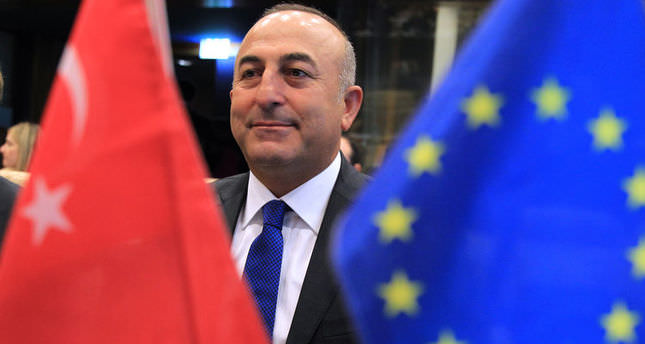 by AA Jun 24, 2014 12:00 am
Turkey is doing its share to take confidence building measures towards the Greek Cypriot administration to remove the blockage on the 23rd chapter for Turkey's EU membership, according to Turkey's EU Minister on Tuesday.

EU Minister Cavusoglu said that the main reason that the 23rd chapter, which covers judiciary and fundamental rights, continues to be blocked is due to the Greek Cypriot administration's attitude.

Turkey continues to pursue EU membership and aims to open not only the chapter 23 on "judiciary and fundamental rights" but chapter 24 which covers "justice, freedom and security" also.

Cavusoglu spoke on the confidence building measures towards the Greek Cypriot administration, and said that the biggest support for the Cyprus issue - referring to the ongoing dispute over the divided island of Cyprus between Turkish Cypriot and Greek Cypriot sides since 1974, came from Turkey.

He urged the EU to open these chapters without further delay, and hoped the process will be much quicker during Italy's term presidency in the EU, starting in July.