Chaos in Iraq may lead to divisions, says Turkmen leader 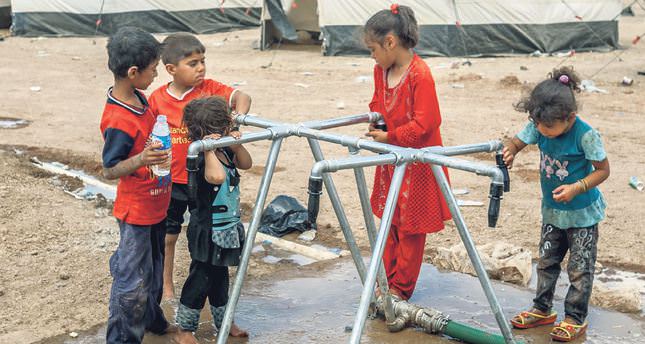 Iraqi Turkmen Front leader Ershad Salihi called on Turkmens, 500 of whom have been killed by ISIS, to take up arms against ISIS yesterday as the front's executive member was killed in Kirkuk

Salihi said nearly 400,000 Turkmen people in Tal Afar fled to Irbil and villages around Mosul. The attacks by the militant group the Islamic State of Iraq and al-Sham (ISIS) have caused chaos in Iraq, forcing thousands of Turkmens to flee their homes. Arriving in Turkey, Salihi convened with Turkish Prime Minister Recep Tayyip Erdoğan and Foreign Minister Ahmet Davutoğlu to hold talks on the Turkmens' situation in Iraq in response to the latest developments and recent chaos. Speaking to Turkish newspaper Sabah, the Iraqi Turkmen Front leader asserted that the Turkmen people need to take up arm against ISIS militants.

Noting that Iraq needs a new government, Salihi stated that he approved of the idea of a new government that will represent all people living in Iraq, although with the caveat that it will be huge injustice to Iraqi Turkmens if a new government again only represent Shiite, Sunni and Kurdish populations. Salihi stated that the Turkmens biggest fear is being forced to leave their lands to the militants. He said that nearly all Turkmens asked whether they will be able to return to their lands, and noted that they will do what they can in order to return. "Building permanent cities is not the solution in this crisis.

Turkmens' urgent needs must be fulfilled. Turkish Presidency of Disaster and Emergency Management (AFAD) has delivered humanitarian aid and saved people's life. We [Iraqi Turkmen Front] also have projects to take concrete steps. When we overcome this crisis, we will return our lands," he added.

Salihi said that Turkmens do not have enough of a defense force to defend themselves and added, "We wished that democracy had raised its voice in Iraq but what is valid in Iraq is the gun. If you have a gun, you are alive. We can use this means [guns] to defend our identity after all of these threats. Otherwise, we have no intention to attack. But, how do you suppose we are to defend ourselves after the authority breaks down?"

When asked if there will be a fresh start in Iraq and if Turkmens will have a voice in the government, Salihi said, "There are Sunnis, Shias and Kurdish people in Iraq. Since 2009, Turkmens have turned into a target. No matter how much we [Turkmens] protect our rights, they always say that we have none. They say that we will always be in the hands of certain groups."

Salihi pointed out that what Turkmens want is Iraq's territorial unity and a new government to be established through elections in order to defend the rights of every person in Iraq. Highlighting that Turkmens are grateful to Turkey, Salihi criticized other regional nations by alleging that they ignore Turkmen troubles.

When asked whether there is discrimination between Shiite and Sunni Turkmens, Salihi stated that they always advised Arabs not to discriminate between sects and gave Tal Afar and Kirkuk as examples of cities where the two sects live together.

Regarding the possibility partitioning of Iraq, Salihi claimed that the Iraqi state will certainly split if the chaos continues unabated. He further added that both Iraq's political wings and the region in general will be adversely affected if partitioning occurs because it will be based on sectarian divides.
ISIS, which developed into a formidable force inside Syria, extended its reach into Iraq after gaining near-complete control of the northern Iraqi city of Tikrit and seizing Mosul, Iraq's second-largest city.

The group seized large swathes of western Iraq's Anbar Province in January, including much of Fallujah and parts of Ramadi, flashpoints of the US-led war in 2003.
RELATED TOPICS