New reform package to provide a boost to reconciliation process 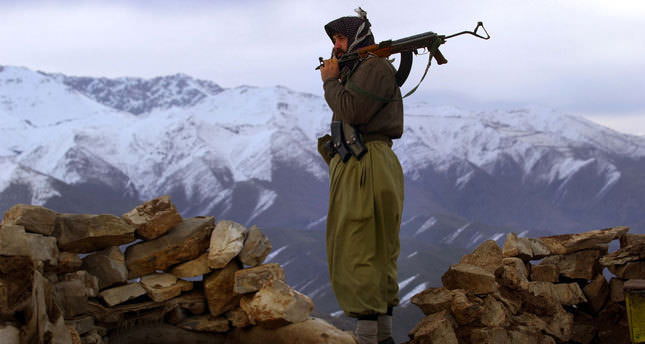 by Mehmet Solmaz Jun 25, 2014 12:00 am
The government is in the process of submitting a bill that will advance the reconciliation process aiming to end the decades-long conflict in the southeast.

Speaking to members of press on Tuesday, Deputy Prime Minister Beşir Atalay stated that the framework of the bill has been finalized and put to the ministers' approval. Atalay did not elaborate much regarding the content of the reform package, but he mentioned that children who have been abducted by the PKK terrorist organization will not be held responsible if they have not participated in militant activities against Turkey and PKK militants who back down from the militant organization and did not serve in senior positions, and the children will be rehabilitated.

The government announced that due to the reform package it will not end the legislative year on June 30 this year. Thus, the Parliament will work efficiently to pass the reform package to show its commitment to the peace process and bring hope to the families of children who were kidnapped by the PKK.

The deputy prime minister stated that Kurdish mothers staging a sit-in to protest against the PKK kidnapping their children marks a first as the PKK had never received such strong open objection from Kurds. He added that mothers speaking out against the PKK abductions for the first time is nothing but a fruit of the peace process that Prime Minister Recep Tayyip Erdoğan's ruling Justice and Development Party (AK Party) initiated almost two years ago. "We've got more work to do" said Atalay, underlining the significance of the reconciliation process for reaching a permanent resolution with regards to the country's Kurdish question.

Speaking to Daily Sabah on Wednesday, renown Kurdish writer and former politician Orhan Miroğlu stressed that the pro-Kurdish People's Democratic Party (HDP) urges the government to take the necessary legal actions as soon as it can, as it fears that all the positive steps taken during the AK Party government would fade away when another government comes into power in the future.

Miroğlu added that the reform package on its own would not mean much if there is no mutual trust between the government and Kurds, including the HDP, PKK leader Öcalan and PKK's militia wing in the Qandil Mountain.

In regards to the Kurdish mothers, Miroğlu criticized the Turkish left for not supporting the mothers of abducted children. "There is this segment of the society that always preaches rights and freedoms, but now they're keeping quiet over the demands of these Kurdish mothers," he said.

In an inclusive interview with Daily Sabah, Star newspaper columnist Ahmet Taşgetiren, said there have been no clashes for almost two years, "but the problem has not ended yet."

According to Taşgetiren, who was among the members of the Wise People Commission – tasked with promoting the peace process and explaining it to the public – the government is planning to introduce necessary laws to encourage PKK members to join their families and live a normal life.

"The organization [PKK] has demands but the state also has its limits," Taşgetiren said and agreed with Miroğlu that mutual trust is necessary to solve the Kurdish question permanently. He added that the main goal of the state is to disarm the terror organization and help its members to leave the hideouts in mountainous regions.

If the PKK comes up with such offers like forming local armed security groups in Kurdish-populated areas, the government would not accept such requests and it would harm the trust, Taşgetiren said, adding that there would not be real peace if the group does not disarm.

In regards to the reform package, the data and public awareness reports prepared by the Wise People Commission should be included in the package, commission member and Habertürk daily columnist Nihal Bengisu Karaca told Daily Sabah.

Karaca stated that the commission members went to all parts of the country and made public observations and explained the peace process to the public. After the completion of the visits, the commission prepared informative data and reports on what the public thinks about the process and what they demand it to bring. She added that, if the government is really intending to bring the peace process to a legal ground, then the works of the Wise People Commission must be included in the bill.

During his party's congress on Monday, HDP head Selahattin Demirtaş read out a letter written by the PKK's imprisoned leader Abdullah Öcalan, in which he said, "the rebellion has ended, it's time to negotiate" and added that the organization will not continue the rebellion that was introduced by marginal socialist groups against the state in the 70s.

Commenting on Öcalan's words, Karaca said Öcalan – who mentioned in one of his letters in 2013 that Turks and Kurds lived under the flag of Islam – had sent a message to the Turkish left that has links to the PKK, which was formed as a Marxist organization in the 70s. According to Karaca, Öcalan demanded marginal socialists and PKK's militia wing to pull their rebellious desires from Kurds, who want to live in peace in Turkey by obtaining their democratic rights.

The government has initiated the reconciliation process in efforts to resolve the issue and talks between the government and Öcalan have proved effective with a ceasefire declared in March 2013 as they have ended a 30-year old insurgency which has killed over 40,000 people.

Many claim the reconciliation process has been productive as more people are aware of the fact that peace is attainable and the country's population turns a blind eye to all attempts that try to sabotage the process, which was evident when a provocateur tried to bring down a Turkish flag in Diyarbakır. Although it did not stir violence it showed that everyone was serious and eager about establishing peace.