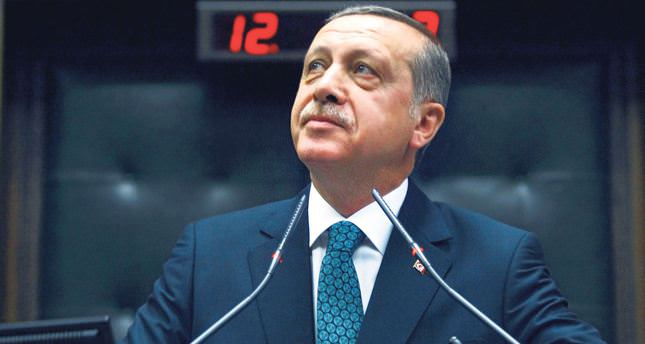 Prime Minister Recep Tayyip Erdogan met with ambassadors from the EU yesterday to discuss numerous subjects including the current crises in Syria and Iraq, the regional refugee crisis, the military takeover in Egypt as well as local issues and the economy. Erdogan outlined the government's policy toward the Gülen Movement, led by Fethullah Gülen. The prime minister is attempting to extradite Gülen from the U.S. on charges of allegedly plotting against the Turkish government, claiming that the movement has infiltrated every level of state institutions and established influence over the judiciary where they have conducted numerous unlawful operations while claiming that Turkey cooperates with and supports terrorist organizations such as al-Qaeda. He informed EU ambassadors that they should be aware of the fact that Turkey does not support any terrorist organizations, but rather fights against them. He noted that fighting terrorism was one of the main subjects of Turkey's EU agenda.

Erdoğan criticized Western states for not calling the Egyptian military takeover a coup and stated that the government will not congratulate General el-Sissi for winning the presidential election because he clearly did not gain power through free and fair elections.

He also noted that the only way to resolve the conflict in Iraq would be through a coalition government while he blamed President Nouri al-Maliki for his divisive policies. With regards to the abduction of 81 Turkish citizens in Mosul by militants from the Islamic State of Iraq and al-Sham (ISIS), Erdoğan stated that they are in touch with Western powers and hope to bring the hostages back home safely. Likewise, in response to the Syrian refugee crisis, Erdoğan said that the situation requires intensive global cooperation as extremism in Syria has risen dramatically and constitutes a serious threat for everyone. The prime minister noted foreign militants used Turkey as a transit door to Syria, posing an imminent threat to Turkey's security saying that the government is working hard to block such third-party militants from entering Syria through Turkey, which issued an exclusion order for 5,300 people.

Erdoğan expressed his hopes about the new presidential system in Turkey saying that he believes that the new system will reinforce stability and confidence in the country. "A new era will begin in September," he said, adding that the new era will enable reforms to be implemented in a faster and more determined manner.

Speaking at the Justice and Development Party's (AK Party) group meeting on Tuesday, Prime Minister Recep Tayyip Erdoğan expressed that being a citizen of the Turkish Republic is the sole criteria for recognition by the government since all faiths, sects and ethnic backgrounds are equally valued.

Touching upon the importance of the government to show respect for all citizens regardless of their backgrounds, Erdoğan stated that differences are an indicator of richness, not conflict, and that the government embraces everyone. He explained that whereas people were forced to comply with certain standards in the past, under oppression for their differences, for decades, the government is now removing the obstacles in the way of different faiths. He cited the returning of non-Muslim pious foundations' properties in Turkey as an example of this progress. "The country was not weakened nor was it divided as the old regime claimed," Erdoğan said, who remarked that fear was self-produced in order to steer people toward a certain mindset.

He also said that he would sue Devlet Bahçeli, the leader of the Nationalist Movement Party (MHP), for insulting him and slandering him and his family through accusations of corruption. He stated that Bahçeli is not capable of becoming a leader given Bahçeli's experience as deputy prime minister. "You cannot even be an apprentice in politics," Erdoğan said to Bahçeli, continuing by addressing MHP supporters saying that he believed Bahçeli cannot advance their cause because he is not fit for politics.

Erdoğan also described what the nature of the presidency will be after the Aug. 10 elections stating that it will no longer be a symbolic position, but rather will combine the authorities given by the constitution with the authority given by the people. "Up until today, the notion of the president was that he represented the government who represented the people," said Erdoğan, noting that they will remove this gap allowing the popularly elected government to rule along with the popularly elected president - signifying in a way an embrace of the people at all levels of the state. He also added that the AK Party will announce its presidential candidate July 1.
RELATED TOPICS