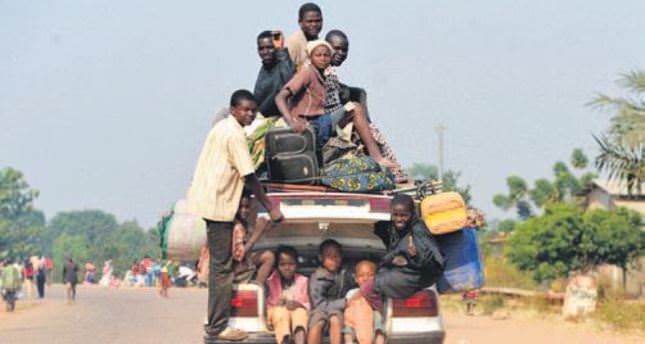 by AA Jun 26, 2014 12:00 am
The prime minister of the Central African Republic (CAR), Andre Nzapayeke, welcomed the possible participation of Turkey in the European Union Force for assistance and to help rebuild the judicial system in the CAR, at a meeting Tuesday with Turkish President Abdullah Gül. "We are very grateful to Turkey for everything it does to solve the crisis in the CAR and we are happy that Turkey might be part of the EUFOR RCA," Nzapayeke told Anadolu Agency (AA) on his short visit to Ankara.

The European Union Force RCA, known as EUFOR RCA, is the United Nations- mandated European Union peacekeeping mission in Bangui, the capital of the Central African Republic. The mission was established on Feb. 10, 2014, and started operating at the end of April 2014. Nzapayeke said that his visit comes "to strengthen cooperation between the two countries and also to seek solutions to the crisis in the CAR." He praised Turkey's efforts to this end.

Foreign Minister Ahmet Davutoğlu had repeatedly stated that Turkey would consider all possibilities to help the establishment of peace in the CAR. "It was a great honor for us to meet the president who has given us a lot of advice as an experienced politician and leader of a country that has through its own forces, solidly built its economy. This is a very useful meeting that allowed us to better known Turkey and benefit from its experience," he said.

Speaking during a visit to Turkey's Foreign Economic Relations Board (DEIK), Nzapayeke said: "We have only 25,000km of roads. Our country's petroleum resources are as yet untapped. We have the capacity for 18 megawatts of hydroelectricity, mostly around Bangui, and we experience 16 hours electrical outages per day. Drinking water access for the whole country is at only 30 percent. We need access to the oceans, most particularly ports."

In response to impunity of crimes in the CAR, he stressed, "The CAR must first rebuild the security forces and the judiciary system, while seeking assistance from Turkey on it." "We are rebuilding our police forces," he said. "The judiciary system and the courts have been destroyed, and we ask Turkey to help us to rebuild, as the current working conditions do not even allow judges to sit," said Nzapayeke. He added that during the trial, armed groups with grenades and guns invaded the courtroom, threatened judges and defendants and released criminals. "All prisons were completely destroyed except Bangui prison."

The CAR descended into anarchy a year ago when Seleka rebels ousted the then president, Francois Bozize, a Christian who had come to power in a 2003 coup. The rebels later installed Michel Djotodia, a Muslim, as an interim president.

Since then, the country has been plagued by tit-for-tat sectarian violence between Christian anti-Balaka militias and Muslim former Seleka fighters.
Anti-Muslim violence has escalated since January, when Catherine Samba-Panza, a Christian, was elected interim president.