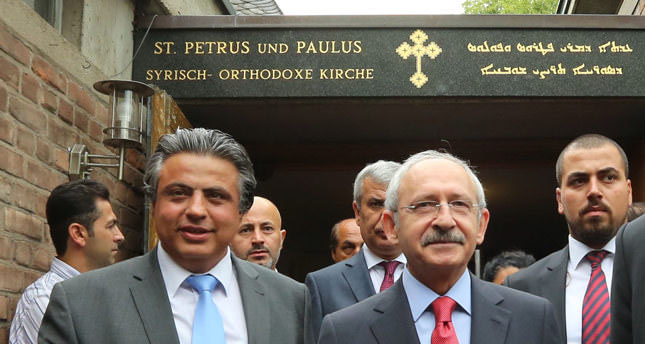 by Daily Sabah Jun 27, 2014 12:00 am
The Republican People's Party (CHP) leader Kemal Kılıçdaroğlu received backlash on Friday for the nomination of Ekmeleddin İhsanoğlu as the joint presidential candidate for CHP and Nationalist Movement Party (MHP) from Europe's Alevi associations and federations during a visit to Cologne, Germany.

The head of Europe's Alevi associations and federations, Turgut Öker expressed in a meeting that the Alevis will not support the joint candidate.  Öker said, " In the final part of our meeting, I clearly told the Republican People's Party (CHP) that we expected them to take bolder steps, to let go of its reserved nature and to adopt a more leftist, democratic and revolutionary attitude. Öker continued, 'By showing a joint presidential nominee, you are building an alliance with the blood shedding National Movement Party (MHP) who is responsible for the deaths in Çorum and Maraş. Why not re-determine your direction and face the left, as would the genuine CHP. Till this day, we have not seen İhsanoğlu in the course of Turkey's democratization and liberation. In other words, we don't believe it's a positive step for Turkey's future to nominate someone who hasn't had any contribution in the struggle of the minorities and their labor movements.