Erdoğan and Barzani meet to discuss instability in Iraq 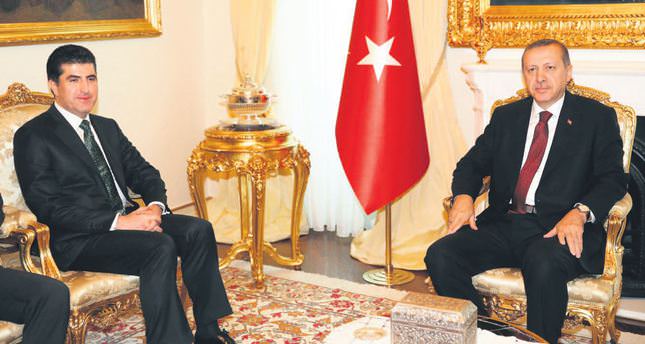 In a meeting with the prime minister of the KRG, Erdoğan stressed the importance of forming a national unity government in Iraq and noted that Maliki's sectarian policies were the cause of the current crisis

Prime Minister Recep Tayyip Erdoğan yesterday told Kurdish Regional Government (KRG) Premier Nechirvan Barzani that the end to the chaos in Iraq necessitated the formation of a national unity government in Iraq in order to resolve the current crisis. Barzani and his delegation, who were invited to Ankara, also met with Foreign Minister Ahmet Davutoğlu, Energy Minister Taner Yıldız and National Intelligence Organization (MİT) Chief Hakan Fidan for over two hours before being received by Erdoğan. Later, Erdoğan and Barzani held a more than one-hour-long meeting to discuss the latest developments in the region.

The visit took place just one week after Barzani formed a new government in the KRG amid the growing threat posed by the Islamic State of Iraq and al-Sham (ISIS). According to sources from the Prime Ministry, Turkish officials and Barzani discussed the latest development in Mosul, Kirkuk, the current status of Turkish hostages who were captured by ISIS on June 11, growing concern over Iraq's territorial integrity and political unity as well as energy issues.

Earlier this week KRG President Massoud Barzani hinted that Kurds may seek independence on account of ongoing turbulence in Iraq, however, this move was not warmly welcomed by U.S. officials. U.S. Secretary of State John Kerry held talks with KRG officials and urged them to stay engaged in Iraq's political transition and support the formation of a new government in Baghdad.

Reports indicate that Erdoğan reached an agreement in line with the U.S. stance following their one hour meeting. According to information obtained from sources close to the prime ministry, Erdoğan and Nechirvan Barzani stressed the significance of the formation of a national consensus government to save Iraq from being dragged into an environment of sectarian-based conflict and protect the country's territorial integrity and political unity.

Emphasizing the idea that instability and security issues in the region are a main cause of concern, Erdoğan stated it was crucial to overcome the crisis and establish an inclusive administration in Iraq which will allow all sects and ethnicities to be represented in a fair manner. Stressing the fact that it was necessary to immediately establish a government through consensus, Erdoğan said Iraq's territorial integrity was crucial and any sort of sectarian- based conflict should immediately be resolved.

The status of Turkish hostages was also discussed during the meeting. ISIS forces seized the Turkish consulate, kidnapping 49 Turkish citizens on June 11, one day after the same organization kidnapped 31 Turkish truck drivers. Since that time Turkey has been continuing intensive diplomatic efforts to rescue hostages.

Erdoğan also reiterated that Turkey has extended a helping hand to people affected by acts of violence in Iraq and said that Turkey has started sending humanitarian aid to those in need in Iraq as of June 12, mainly to areas where Turkmens reside.

Energy was also an important topic discussed during the meeting. Both Erdoğan and Barzani expressed their determination to continue cooperation in this field. KRG oil exports from the port of Ceyhan began on May 23 and so far almost 4 million barrels of crude oil have been loaded onto four tankers. Earlier this week Energy Minister Yıldız announced that oil exported from the Kurdish Regional Government (KRG) via Ceyhan was sold to international buyers and payment of the revenue of the first batch of crude has been deposited at Halkbank. Last December the KRG administration completed the new pipeline that connects the Taq Taq oil field to the entry point for the Kirkuk-Ceyhan pipeline and since that time 120,000 barrels of Kurdish oil have been flowing on a daily basis to Ceyhan without interruption amid the ISIS threat in Iraq.
RELATED TOPICS