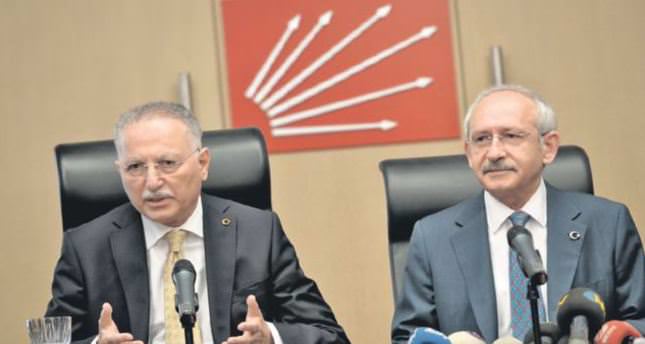 The CHP and MHP's presidential candidate İhsanoğlu has begun to visit other opposition parties as part of his campaign, while polling company GENAR found that if PM Erdoğan decides to run, he will easily win by receiving 55.2 percent support

As part of his visit program, İhsanoğlu yesterday convened with CHP leader Kemal Kılıçdaroğlu at CHP headquarters. During the meeting,

Kılıçdaroğlu praised the joint candidate İhsanoğlu and said, "he [İhsanoğlu] embraces all parts of society and does not use discriminative discourse, that is why, we [CHP] support his candidacy."

Highlighting that İhsanoğlu is a wise person, Kılıçdaroğlu noted that even though he has no political background, he will keep the nation together.

İhsanoğlu thanked the CHP administration, deputies and party members for their steps and for the "huge compromise" they made by announcing a joint candidate. İhsanoğlu added that the compromise started with the CHP and MHP is gradually increasing.

İhsanoğlu also visited the Democratic Left Party (DSP) for his electoral campaign. Pointing out that his meeting with DSP leader Masum Türker was
beneficial, İhsanoğlu stated that the contact that he has with political parties will give a new momentum to his presidential bid and he is hopeful for the upcoming presidential election. "İhsanoğlu's candidacy proves that Turkey has options and only certain figures and a certain discourse do not dominate the entire country's future," said Türker, adding that İhsanoğlu will be a president that will ensure the country and the nation's indivisible integrity.

Türker stated that DSP will officially announce his support for İhsanoğlu after the evaluation of their meeting yesterday.

Visiting far-right Great Union Party (BBP), İhsanoğlu said that his meeting with BBP leader Mustafa Destici is positive and BBP is ready to compromise over his candidacy.